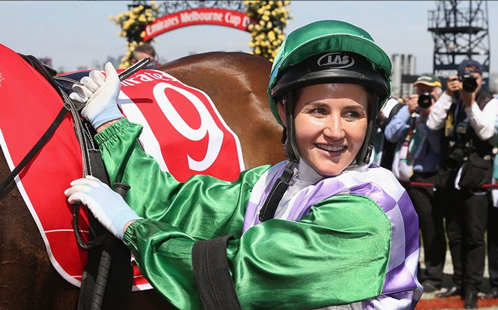 The following opinion piece, by Dr Wayne Peake from the School of Humanities and Communication Arts, was first published on The Conversation (opens in a new window) website.

"I can't say how grateful I am [to the people who helped me], and I want to say to everyone else, get stuffed, because women can do anything and we can beat the world."

"To think that [trainer] Darren Weir has given me a go and it's such a chauvinistic sport, I know some of the owners were keen to kick me off, and [part-owner] John Richards and Darren stuck strongly with me."

Thus spoke (opens in a new window) Michelle Payne, rider of the 2015 Melbourne Cup winner, Prince of Penzance, after the race on Tuesday.

There was a touch of National Velvet (opens in a new window) about it all. A female jockey on an unfashionable horse trained in the bush (though Weir is one of Victoria's leading trainers), winning arguably the world's most coveted race.

Payne was thrust onto a stage that gave her the ear of a vastly broader audience than that of just horse racing participants and followers. She grasped the opportunity to give voice to a few grudges that she had clearly been harbouring.

Payne described racing as "chauvinistic". I am not a discourse analyst but would venture to apply this interpretation to her words: that almost all of the decision-makers in racing are male and that they almost invariably favour their own sex.

How hard has it been for women to make their mark in this male-dominated world? Horse racing in the 21st century possibly has a stronger female presence than most sports theoretically "open" to both sexes, but has it really been any more welcoming? Racing's history may provide a useful context for Payne's remarks.

Edwardian racing administrators shared the negative views of their colleagues in charge of other "dangerous" physical sports, such as the football codes, on active female participation. Female jockeys were unthinkable. This was despite there being a much broader female presence in other branches of equestrianism, such as the hunt, than in physical contact sports.

But it was not only as active participants that female involvement in racing was curtailed. Any betting by them was very much frowned upon. Their involvement in sweeps, which involved no analysis of form, weights or measures, rather just mere chance, was accepted. Perhaps a side bet for a pair of gloves was tolerated too.

However, women who strayed into the male crucible of the betting ring were routinely refused a bet by stormy-browed bookmakers, and were led out by racing club officials.

To some extent women were permitted into the more backstage practice of racehorse training, so long as there was no official acknowledgement of the de facto arrangements on raceday. So it was that Mrs Allan McDonald really trained (opens in a new window) the 1938 Melbourne Cup winner, Catalogue, despite her husband's name appearing in the record books.

At the time the Victorian Racing Club would not allow women to hold a trainer's licence. There was still no question of them riding in races – nor of "strapping" a horse.

Famed turf journalist Bert Lillye told the story of a woman who masqueraded as a male jockey for many years on the outback tracks of Queensland in the early 20th century. Only after her retirement did it become public that she was a woman. It's a little hard to believe that her male colleagues had not worked it out before then.

By the late 1960s the outlook had improved slightly for aspiring female jockeys. Minor bush and provincial clubs occasionally programmed races reserved for amateur female riders. These were given demeaning names such as "The Powder-puff Derby".

Ironically, the "lady jockeys" were given little opportunity to powder their noses, as no changeroom facilities were provided. The girls were compelled to silk-up in the trees outside the course, or in backs of cars, or in toilets. There was initially no betting on these races, which only franked them as mere novelty acts.

Queenslander Pam O'Neill was one of the leading riders on this ad hoc circuit. Years later, she competed against men on equal terms with great success.

It was not O'Neill, however, who first rode against the men. Appropriately enough, given Australian racing's habitual borrowings from the equine culture across the Tasman Sea, that laurel went to New Zealander Linda Jones (opens in a new window).

Jones had been competing successfully for a year in open racing when she was invited to ride (opens in a new window) in Sydney in March 1979 on Northfleet, a horse trained by her husband Alan. The rules of racing were bent to allow a female to ride in a registered race. The privilege was not initially extended to Australian female jockeys.

Jones' arrival was heralded by Sydney newspaper headlines such as "Challenger in Mascara". She had several unsuccessful rides in Sydney, well reported in the media, before she won the Labour Day Cup at Brisbane's Doomben racecourse on Pay the Purple.

In the wake of Jones and O'Neill a growing number of female jockeys have achieved notable success riding on equal terms. Maree Lyndon, Beverley Buckingham and Claire Lindop were among them. Now, there are too many to name. In fact, modern-day racing is dependent on the female sex to fill the depleting ranks of jockeys.

The male body's expanding morphology means that there are fewer small boys able to take up race-riding apprenticeships, despite minimum weights having increased about eight kilograms in the last 30 years. The larger percentage of smaller-framed, lighter girls has seen a switch in the majority from boy to girl apprentices.

This is particularly the case in country racing and at picnic race meetings in which "amateur" jockeys ride. In that form of racing, females regularly provide well in excess of half the riders on hand.

However, the greatest breakthrough by a woman in racing – at least prior to Payne's cool-hand performance on Cup day – has been achieved by a trainer, rather than a jockey.

As a consequence of her high profile, her squiring by the media and her great success, it is now rarely recalled how many obstacles Gai Waterhouse (nee Smith) had to overcome to take up racehorse training. The daughter of legendary trainer T.J. Smith, in the late 1980s she married Robbie Waterhouse, heir of the great Sydney bookmaking dynasty. But Robbie fell foul of the industry's leaders as a consequence of a putative prior knowledge of the infamous Fine Cotton ring-in (opens in a new window).

Purely on the basis of her marriage to Waterhouse, Gai was refused a trainer's licence. Only after a seemingly endless round of interviews with the principal racing club, and subsequent court hearings and appeals, was she granted it. Within a few years she became a racing powerhouse in her own right.

Given all this, it is fair to say that the current eminence of women in Australian racing has been no free ride.