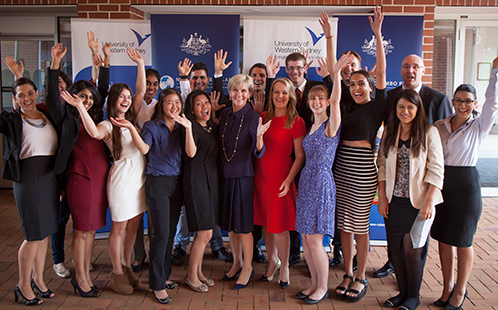 The University of Western Sydney welcomed a visit by the Minister for Foreign Affairs, the Hon Julie Bishop MP today, as she met with students who will be travelling overseas as part of the Commonwealth Government's $100 million New Colombo Plan (NCP).

Minister Bishop visited the University together with Member for Lindsay, Fiona Scott MP, and was greeted by UWS Vice-Chancellor, Professor Barney Glover, and other UWS representatives.

Over 190 UWS students will travel internationally this year as part of the NCP's scholarship and mobility programs, which aims to lift knowledge of the Indo-Pacific in Australia by increasing the number of Australian undergraduate students undertaking study in the region.

UWS students will travel to countries such as Thailand, Japan and Singapore, where they will undertake internships or conduct various projects that range from clinical placements in hospitals to working on sustainable development and community business projects run by NGOs.

The UWS-funded initiative offers UWS's very best students an international academic or leadership experience, with 25 students also having the opportunity to travel this year as part of the program.

Professor Glover said expanding the University's international horizons is a strategic priority for UWS, and he would like to see increasing numbers of students study internationally and develop a deeper engagement with our region.

"The experiences and relationships we forge through education permeate, inform and shape our future endeavours," said Professor Glover.

"Spending time overseas to study is a life-changing experience, and the positive impact of initiatives like the New Colombo Plan will be felt for years to come.

"In addition to the vital scholarly experience, students forge friendships and connections, develop leadership skills, and gain a first-hand understanding of another culture, which is invaluable for their future careers.

"This is an opportunity that is guaranteed to enhance our students' personal and professional lives, long after they return home."

While visiting the University, the Minister also viewed construction of the multi-million dollar Werrington Park Corporate Centre, which is on track to cater for western Sydney's growing need for new high-tech industries and knowledge-economy jobs.

The $30 million project is a partnership between UWS, Penrith City Council and the Penrith Business Alliance, and is being delivered with the assistance of a Commonwealth grant of $13.573 million as part of the Suburban Jobs Program.

The Minister also discussed with UWS representatives the recent Memorandum of Understanding between the University and Beijing University of Chinese Medicine, which will focus on developing an Australian-first Chinese medicine integrative clinical service in Sydney, as well as collaborations between the two universities on both clinical and laboratory-based research.

About the New Colombo Plan

The Australian Government has committed $100 million of new funding over five years for the New Colombo Plan (NCP).