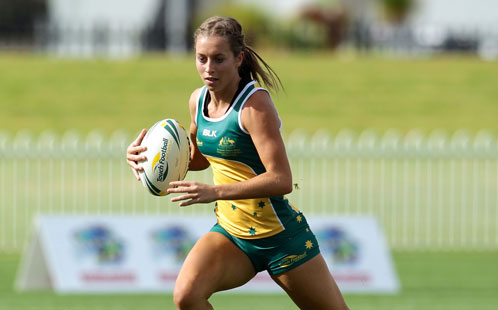 At the Touch Football World Cup, Danielle was the third leading try scorer for the Australian team as they defeated New Zealand 9-4 in the finals held in Coff's Harbour on May 3.  The World Cup represents the highest level of competition for Touch Football players bringing together players from 25 nations.

"Australia is pretty much the world leader in Touch Football," Danielle says.

"To play for the best team at the highest level, on Australian soil is pretty special."

This is not the first time Danielle has represented Australia in Touch Football. She made her debut in 2012 in the Under 18s squad, followed by the Women's squad in 2013 and then the Australian Open Women's team in 2014.

She says her biggest challenge right now is maintaining a balanced lifestyle while completing her studies. She also recently secured a place in the UWS Elite Athlete program. For Nicola, who has been in Canada for just over two weeks for the FIFA Women's World Cup, the excitement is building as the team prepare for their first game against the USA which is scheduled for June 8.

"Training has been intense and spirits amongst the girls and staff are high," she says.

Like Danielle, Nicola says maintaining a balance while completing her studies and playing soccer has been the biggest challenge so far.

"The full time commitment of both Uni and soccer particularly this year has been the biggest challenge I have faced to date in relation to balancing my study and sport. This has always been a part of my life but being a fourth-year Uni student and with the intensity of our full-time soccer program; this year has definitely proven not to be an easy situation."

But she says the support she has received from UWS, her family and friends has been second to none.

She will continue to play soccer in the future and hopes to complete her degree within the next 18 months.

"Both my study and sport are just as important so this continues to motivate me to finish my studies and hopefully be able to play and work overseas in the upcoming years."

"At the moment soccer is a big part of my life and I'm just living the dream really."

You can watch Nicola in action at the FIFA Women's World Cup through SBS (opens in a new window).