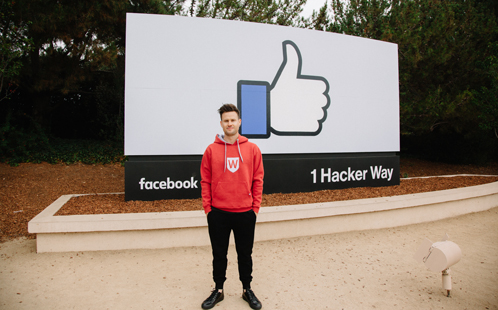 Ten years after graduating with a degree in Bachelor of Design (Visual Communication) at Western Sydney University, Luke Martin is now working in what many people would consider the dream job. As Creative Director at Facebook's new in-house creative agency (The Factory) Luke mingles with the cream of Silicon Valley to produce advertising content for the social media company. It all began at Western Sydney University, where he learned the ground rules of design while running his own BMX clothing brand in his spare time.

"Western Sydney University was the perfect environment to study and learn about all things design. Throughout my degree I utilised the skills and theories I learnt in class by applying them to my clothing brand - Tyme. And now I utilise them here at Facebook." says Luke from Facebook's Headquarters in Menlo Park, California.

"I never considered applying to any other university. I grew up in Emu Plains and went to Emu Plains Public School and Nepean High School, so Western Sydney University was the obvious next step for my education. Looking back I made the right decision. The course, the facilities and the faculty were all amazing, and what I learned helped me get where I am today."

For all his success, life could have turned out very differently for Luke. Competing at the Canberra BMX championships at the age of 16, a miscalculation saw Luke go over the handlebars and crash into the next jump, splitting his liver and severing the main artery to his kidney. Luke awoke from an induced coma to discover a week had passed since the accident. He remained in hospital for another 7 weeks, and was in and out of surgery and intensive care. At one stage Luke's condition was so critical the doctor asked his parents to prepare to say their last goodbyes. The accident helped him recalibrate his priorities, and saw him take his love for design and BMX in a new direction by starting his clothing brand. "I never really thought about going to University before my accident, though the scare of nearly losing my life made me re-evaluate my goals," he reflects. "After the accident I focused my attention on design: I recall meeting a graphic designer who was working on the BMX club's jerseys. This project introduced me to what graphic design could entail, and I quickly developed a love of the conceptual stages of design. I started my own brand and found out about the course at Western Sydney University, and the rest is history. The entire process was very linear."

Luke graduated with a Bachelor of Design (Visual Communication), and began his professional career working at News Limited as a graphic designer in the advertising department. After moving through a series of advertising agencies in Sydney, he was asked to handle the Apple account while working at TBWA/Sydney, to oversee the content for the Australian and New Zealand markets. His work impressed his bosses in America, so he was relocated to TBWA/Los Angeles to work on the American advertising for the brand. After spending 2 years in Los Angeles, Luke then left the agency world and took a gig working directly for Apple, out of their headquarters in Cupertino. His work then caught the eye of the new in-house agency under development at Facebook.

"The past year at Facebook has been the best of my career" he says. "The company is open and collaborative. The office layout is entirely open so we can see what each other is working on. Out of the two thousand staff members, no one has an office, not even Mark Zuckerberg. Everyone is young and enthusiastic and it's reflected in the culture. So it's very different to other places I've worked, though easily the most enjoyable, and I think you see it in the work we create. Even the work-life balance is great."

Luke says he still draws on the skills and knowledge he gained from his time at uni. "The ads I produce at Facebook and previously at Apple are good examples of some of the knowledge I acquired while studying at Western Sydney University. Minimalist design aesthetics and hierarchy of message is key when working on global brands with mass audiences. I learnt a lot about these theories while studying at Western Sydney University, and apply them in my everyday."

For most students, working at a global company like Facebook is the dream job. Reflecting on his career, still in its infancy, Luke nominates passion and dedication as key traits for young professionals looking to make their mark. "Working for a range of agencies and companies in Australia and America has taught me how to embrace every brief you're given, no matter how small or ordinary it may first appear," he says.

"I try to complete every job I receive with complete passion, to make the most of every situation and opportunity, as you never know where it will lead. A lot of people don't give their all if they disagree with the direction or the size of the project, but that kind of attitude only means you miss out on opportunities to impress".

"Being positive and working hard is the best way to thrive in the industry, and in life," says Luke.