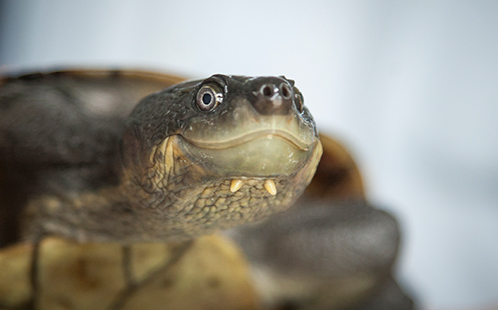 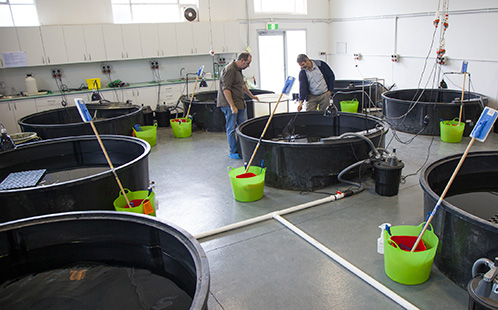 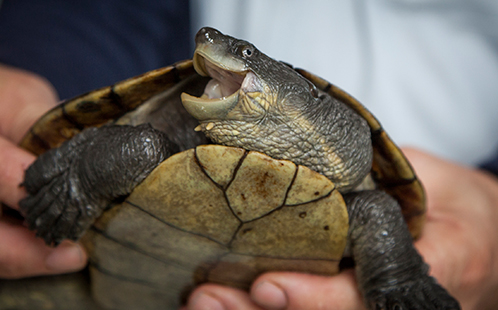 Seventeen turtles in quarantine and a team of scientists could be all that stops a native turtle species in NSW from being wiped out by a mystery disease that has killed an estimated 400 turtles since February this year.

The Bellinger River Snapping Turtle is found in only one place on earth - a near pristine 60 kilometre stretch of the river on the Mid North Coast of NSW.

University of Western Sydney zoologist, Dr Ricky Spencer says over 90 percent of the turtle's home range is affected and the disease appears to have 100 percent mortality.

"The impact of the disease is unlike anything we have seen in turtles in Australia," says Dr Spencer, from the UWS School of Science and Health. "The species has almost been wiped out in less than a two months."

"Preliminary tests have not been able to identify a single pathogen or any toxins that is responsible for the disease."

Turtles with the disease lose weight and become disoriented, with large lesions on the eyes. Ultimately, the disease can cause lesions throughout most of their body.

"The disease was moving through the habitat very quickly. It was a race to collect unaffected turtles from the Bellinger River and transport them to a quarantine facility," he says.

Dr Spencer is working in partnership with the NSW Office of Environment and Heritage (OEH), Taronga Zoo, NSW National Parks and Wildlife Services (NPWS) and a team of other agencies and experts to save the species from extinction.

A coordinated team from OEH, UWS, NPWS, Wildlife Health Australia and others, under the direction of Dr Spencer went into the River to collect healthy turtles before they became affected by the disease. Seventeen turtles without visible signs of the ill health were able to be safely retrieved from a the last remaining section to which the disease had not spread.

"The turtles are in quarantine and appear to be completely free of the disease. Healthy turtles will be used in a breeding program to help rebuild the wild population" says Dr Spencer.

The Bellinger River Snapping Turtle is unfortunately not the only turtle species under serious threat.

To coincide with the recent World Turtle Day, Dr Spencer said worldwide freshwater turtles are disproportionately represented on the IUCN global list of endangered species – 62 percent of species are either threatened or endangered.

Turtles play a vital role in maintaining the ecosystem of rivers by acting as 'vacuum cleaners' that eat dead and decaying matter and help recycle nutrients.

"Turtles are essential to the health of all Australian river and wetland systems," said Dr Spencer. "Losing turtles from a river could be catastrophic for the local environment."

Dr Spencer says turtle sightings by members of the public will be vital to help scientists better protect them.

"Everyone can be a 'Citizen Scientist' by installing the free app, TurtleSAT, on their mobile phones or visiting the website, TurtleSAT.org.au(opens in a new window)," he said.