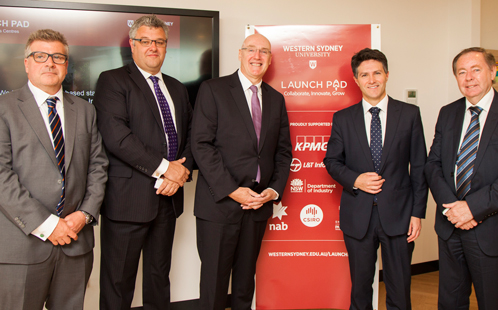 In a boost for emerging entrepreneurs in Western Sydney looking to take their products to a wider market, NSW Minister for Innovation Victor Dominello has officially opened Western Sydney University's newest Launch Pad Centre at Parramatta.

Located at the Western Sydney HQ of official partner KPMG (opens in a new window), the Launch Pad innovation and technology accelerator program brings together government, corporate and University expertise to provide mentorship to start-ups and early stage businesses.

Along with KPMG, other official partners of the Launch Pad program include NAB, CSIRO, the NSW Department of Industry, and L&T Infotech, as well as councils from Parramatta, Penrith, Liverpool and Camden.

"Western Sydney's diverse population has a natural entrepreneurial spirit, and the LaunchPad will help local businesses transform their ideas into products for the market," he says.

"By providing targeted support to start-ups and growing businesses and helping them make the leap from great idea to commercial reality, we can transform the region into a global technology hub and create new jobs to replace traditional industries."

The University's LaunchPad initiative provide clients with a range of services and resources, including:

In addition, the Parramatta LaunchPad will be augmented with additional facilities to be provided by Parramatta Council in 2016, including a Startup Accelerator program focused on data analytics.