Crimes against the environment: the silent victim of warfare 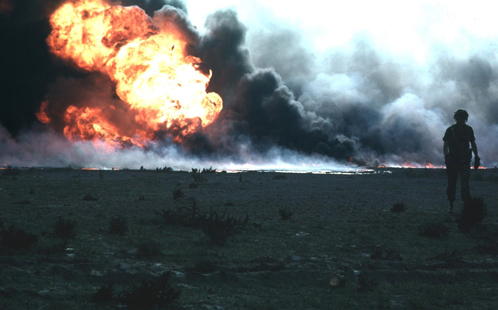 The following opinion piece, by Professor Steven Freeland, from the School of Law, was first published on The Conversation (opens in a new window) website.

On Friday (opens in a new window) the United Nations marked the "International Day for Preventing the Exploitation of the Environment in War and Armed Conflict".

Throughout history the environment has been a silent victim of human conflict. The problem is ongoing. It is time we properly recognised crimes against the environment and made those responsible for such crimes fully accountable.

In August 1945, we witnessed the destructive capability of weapons technology, when the United States detonated atomic bombs over Hiroshima and Nagasaki, resulting in massive loss of life and environmental destruction.

During the Vietnam War, the United States implemented Operation Ranch Hand to devastating effect to destroy vegetation (opens in a new window) used by the enemy for cover and sustenance, through the use of chemicals such as Agent Orange. Attempts (opens in a new window) were also made to deliberately modify the environment to create floods along vital supply routes utilised by the North Vietnamese forces.

More recently still, who can forget the haunting images of more than 700 burning Kuwaiti oil well heads, which had been deliberately ignited by retreating Iraqi forces during the Gulf War in 1991 – a scene that was likened to Dante's Inferno.

Over the following ten years, the Saddam regime built barriers and levees (opens in a new window) to drain the al-Hawizeh and al-Hammar marshes in southern Iraq, an area some believe is the site of the biblical Garden of Eden. This effectively destroyed the livelihood of the 500,000 Marsh Arabs who had inhabited the area of this unique ecosystem.

Actions such as these demonstrate how the deliberate despoliation of the environment can have catastrophic effects, not only on human populations, but also in ecological terms. For example, nuclear, biological and chemical weapons, as well as having the potential to kill many thousands of people in a single attack, have effects that may persist in the environment, in some cases indefinitely.

The devastating effects of environmental warfare can continue long after the conflict is resolved, jeopardising or destroying the lives and livelihoods of those reliant on the natural environment.

Moreover, access to natural resources – or the lack of access – can itself be the trigger for conflict.

Approximately five million people were killed during the 1990s in armed conflicts relating to the exploitation of natural resources such as timber, diamonds, gold and oil. The United Nations Environment Programme (UNEP) has found that (opens in a new window), over the last 60 years, at least 40% of all internal conflicts have been linked to the exploitation of natural resources.

Recent conflicts in Sierra Leone, the Democratic Republic of Congo, Liberia and Angola were not only fought over natural resources, but the exploitation of those resources in turn funded the combating parties to acquire weapons. This has given rise to the phenomena of "conflict resources ", where natural resources commercialise and prolong conflict. It becomes a vicious self-perpetuating cycle.

Environmental degradation and exploitation can thus be both a cause and a consequence of armed conflict. The International Court of Justice has clearly recognised that damage to its environment may constitute an "essential interest" of a state. Such recognition will only increase as the world gains further insights into the broader state of the global environment, including the disastrous effects of climate change.

Despite all of the evidence, however, deliberate environmental destruction during warfare is still largely regarded, as rape once was, as an unfortunate consequence of war.

It is, of course, true that war and armed conflict are inherently destructive of the environment. But that is no reason to allow leaders to deliberately or recklessly target the environment in order to achieve their military goals. Deliberate destruction is no longer acceptable, particularly given the ongoing development of weapons capable of widespread and significant damage.

There is therefore much more that should be done. Just as international law has made great strides forward by classifying rape during armed conflict as a war crime (opens in a new window), a crime against humanity, or even genocide in certain circumstances, we should recognise that intentional environmental destruction can also constitute an international crime. Proper modes of accountability should be incorporated into the mechanisms of international criminal justice.

"Crimes against the environment" should therefore be incorporated as a separate crime within the jurisdiction of the International Criminal Court, in order to better protect our most cherished assets for future generations.

Steven Freeland is the author of Addressing the Intentional Destruction of the Environment during Warfare under the Rome Statute of the International Criminal Court (opens in a new window) published in 2015.