Cricket, commentary and the dollar: Benaud’s legacy is complex 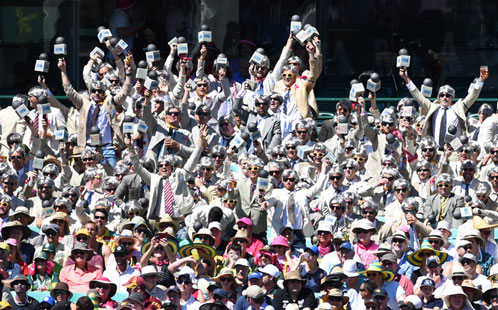 The following opinion piece, by Professor David Rowe from the Institute for Culture and Society, was first published on The Conversation (opens in a new window) website.

Around 150,000 deaths are registered in Australia every year, but few receive the "end of an era" tribute accorded Richie Benaud. He was with us as a player, journalist, author, consultant and commentator for so long that he witnessed the cricket order passing from neo-feudal (opens in a new window) to hyper-capitalist (opens in a new window). He played no small role in the game's transition, and a reading of the life of Richie Benaud is also a tale of the changing relationships between sport, media, economics and society.

Benaud's conspicuous success as a leg-spinning all-rounder and captain has been well-documented (opens in a new window). Of greater general note was his proactive approach to the game. This was widely interpreted as quintessentially Australian. More accurately, it stemmed from his conviction that Test cricket needed to renew itself or fail in the post-war "sportainment" industry.

Australia's dashing captain, whose unbuttoned shirt sometimes bordered on the risqué, had little interest in the dour five-day draw beloved of cricket's shrinking cohort of hair-shirt purists. This was the pragmatism of a teacher's son born in Sydney's outer west, relocated to the country, and who attended Parramatta High School with the Hollywood-bound Rod Taylor.

At a time when even elite cricketers couldn't survive just by playing, Benaud's on-field flamboyance was underpinned by sober career planning, first in accounting and then in journalism. Combining professional cricket with Sydney Sun reporting rounds and advertised product endorsement, he went on to fast-track broadcasting training with the BBC in the heartland of the old Ashes enemy and to many decades as a columnist with the racy, now defunct, News of the World.

This was the internationalisation of a post-playing career that recognised new possibilities of making a good living from sport's indispensable business partner: the media. It enabled a working life in two hemispheres, especially after Benaud began his long-running television work with Australia's Channel Nine in 1977.

That was the year of the cataclysmic World Series Cricket ushered in by Kerry Packer. Benaud acted as his astute and well-credentialled consultant (opens in a new window).

The "Packer Revolution" (disparaged by some as a "circus") was certainly innovative (opens in a new window) in many respects. It effectively utilised the still-new possibilities of colour television and introduced coloured clothing, night games, white balls, new camera angles, field restrictions, excitable commentary, high-pressure marketing and travelling bands of international cricketers for hire.

Packer's World Series cricket substantially weakened the power of cricket's international and Australian establishments, killed off the public broadcasting (via the ABC) of top-drawer men's cricket, and made it possible for cricketers to become multi-millionaires. In advancing the popularity of one-day cricket, the World Series operation also paved the way for the sped-up, even flashier form of the game that is Twenty20 cricket.

By unleashing commercial forces in cricket as never before, the Packer-Benaud brains trust also laid the foundation for India's political-economic domination of world cricket and the Indian Premier League's Bollywood-spiced player meat market.

Benaud's organisational acumen made him much more than an ex-Australia cricket captain with a talent for slow-cooked commentary and bone-dry wit. He somehow managed to be a moderniser cloaked in traditionalism, his stillness counterbalancing the noisy spectacle that he'd helped to create.

But Benaud's predilection for change had its limits. He was keen, for example, to hold the line on the rules governing legal bowling.

Having made the switch in 1999 from the BBC to commercial free-to-air Channel Four in following cricket's broadcast contract, Benaud walked in 2005 rather than follow the money to its new BSkyB pay-TV home. He determined, rightly, that this exchange of big broadcaster money for a much-reduced live audience was one commercialising step too far.

An unlikely recruit to celebrity culture

Benaud watched the game with great clarity from his vantage point in the media centres of the cricketing world. But he could not have anticipated that Richie watching would become a popular diversion in its own right.

His slightly odd appearance, redolent of an outback cricket fan making an annual visit to a big-city Test match, and his eccentrically memorable and compulsively imitable voice, made him ripe for parody.

It was quite a ride from 5 Sutherland Road, North Parramatta, to his homes in Coogee, London and the south of France. By journey's end Benaud occupied the prime cultural role assigned to those dignified male Australian cricket commentators whose longevity makes them plausible bearers of nostalgia-tinged, old-school gentlemanliness (opens in a new window).

Only the late Alan McGilvray (opens in a new window) could challenge him as the "Voice of Cricket" in Australia – and for Richie Benaud the magic of television meant that cricket followers could put a cream jacket and a slight squint to the voice.

Despite the sanctifying tone of many of his obituaries (opens in a new window), Benaud did not lead an unblemished life. His management of the 1976 International Wanderers touring team in apartheid-era South Africa was an obvious error of ethical judgement. He was also rather reluctant to reflect publicly on any negative ramifications of his alliance with Kerry Packer and the other ruthless forces of corporate-commercialised cricket.

But Richie Benaud did much that was admirable in his life. His death has now made permanent the beige suit-sized hole in the Channel Nine cricket commentary team that appeared after his car accident and skin cancer diagnosis.

Much has been made of his Eight Rules of Commentary (opens in a new window). One fitting Benaud legacy would be to see that wise guidance fully absorbed by the current crop of self-regarding ex-player commentators and their successors who have benefited from his trailblazing life.