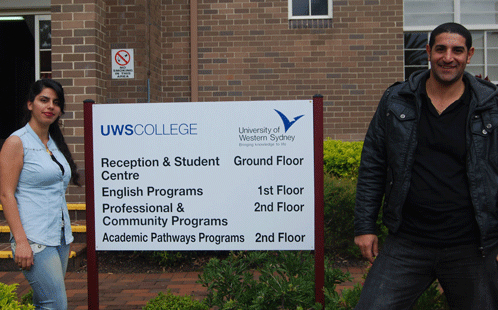 A new scholarship program which targets students from refugee backgrounds is making a significant difference in the lives of its first recipients.

Mamdoh Samaan from Egypt and Sali Farhan, originally from Iraq but living in Syria, arrived in Australia with their families just over a year ago.

With lives fragmented by civil war and unrest, both needed a new home and a fresh start. Mamdoh had already obtained his degree in Veterinary Science and had been working for a pharmaceutical company in Egypt while Sali had begun studying Civil Engineering in Syria.

But as a first step to establishing a happy and productive new life in Australia, both needed to improve their English skills. The opportunity to do that came through UWSCollege's new Refugee Scholarship program established in 2013.

UWSCollege prepares students for eventual transition into UWS by offering a foundation course and diplomas in a variety of subjects. The UWSCollege English Language Program offers fully accredited courses that equip students with the language and communication skills needed to meet the challenge of university study.

But for students with refugee backgrounds, especially those recently arrived in Australia, the financial challenges of pursuing higher education can be cost prohibitive. The UWSCollege Refugee Scholarships aim to provide assistance for promising students in helping to bridge that gap, says UWSCollege Dean and CEO, Dr Kerry Hudson.

"For people who have been displaced from their homes and in many cases, endured the trauma of war and violence, the effects can be devastating.

"We know that education can have a transformative effect on people's lives given the right support and encouragement.

Now, with the help of their scholarships, which cover up to 40 weeks of English tuition, Sali and Mamdoh have been polishing their English language skills in preparation for taking their next educational steps.

For Sali, that will mean pursuing a Diploma in Engineering at UWSCollege that will fast track her for entrance into the second year of a UWS Civil Engineering degree. Mamdoh has decided on a change of career and hopes to pursue either a career in podiatry or if his scores are high enough, enrolling in a Bachelor of Medicine/Bachelor of Surgery at UWS.

Both Mamdoh and Sali are optimistic about their futures and are anxious to complete their English language studies. With successful completion, both should be eligible to apply for a Commonwealth-supported place at University.