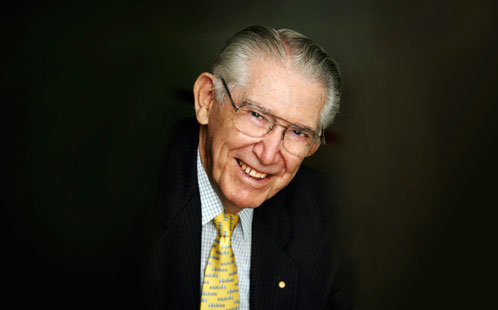 It is with sadness that UWS acknowledges the passing of Emeritus Chancellor, Mr John Phillips, who passed away on 3 November 2014 following a period of ill health.

John Phillips was a much respected and highly regarded member of the UWS family.

He was only the second Chancellor in the University's 25-year history, serving in the role from 1 January 2001 until his retirement on 31 December 2010.

John's exemplary leadership of the Board and his advocacy on behalf of UWS during those 10 years contributed significantly to the growth and development of the University that we know today.

Outside UWS, John Phillips had a long and distinguished executive career spanning some 50 years.

One of John's enduring legacies will be his lifelong dedication and service to Australian public life and, of course, UWS was the beneficiary for many years of this commitment to serve the Australian community. For this we owe him a debt of gratitude and appreciation.

He gave his time and support to a wide range of educational, community, religious and charitable organisations; service which saw him become an Officer of the Order of Australia and one of only a handful of Australians to be conferred with a Knighthood of the Grand Cross of the Order of Saint Gregory the Great – a rare and prestigious Papal knighthood.

John's outstanding service to both the University and Australian public life were also recognised with a UWS honorary doctorate in April 2011.

As Chancellor, John Phillips contributed knowledge, experience, values and reputation – contributions that were invaluable to UWS's development. John had an unwavering commitment to the value of higher education and the University's purpose in Greater Western Sydney. Above all else, as Chancellor, John ensured the voice of students was heard in all discussions affecting their education. He had a rare affinity with our student body that was appreciated by all students with whom he came into contact.

On behalf of the UWS Board of Trustees and the broader UWS community – including the many thousands of UWS students whose graduations John presided over in his time as Chancellor – I extend our sincerest condolences to John's wife Moya, and the entire Phillips family.