The eight recipients to receive honorary doctorates and honorary fellowships are: The University is pleased to be awarding Emeritus Professor Beverley Raphael AM an Honorary Doctorate of Science and the title of Emeritus Professor as part of this ceremony. Professor Raphael recently retired from the role of Professor of Population Mental Health and Disasters within the UWS School of Medicine. A pioneer in our understanding of the mental health response to grief and trauma, Professor Raphael’s contribution to mental health research covers a wide field: bereavement, psychological trauma, disasters and terrorism, to name but a few. Professor Raphael’s research and scholarship is also prodigious, with her work with the Disaster Resilience and Recovery Research Group attracting numerous research grants and securing Commonwealth funding. She has also published extensively, including research on Indigenous public and mental health, outcomes related to the Sichuan earthquake in China, and the 2002 Bali bombings. She has received numerous honours and awards in recognition of her work, including being made a Member of the Order of Australia. 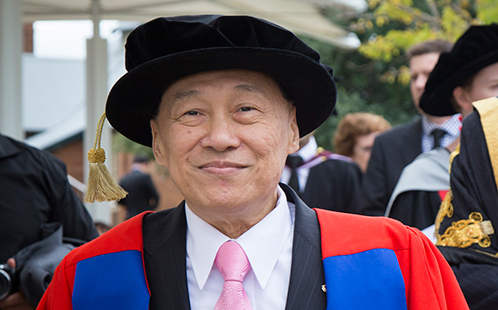 The University is pleased to be awarding Dr William Chiu JP an Honorary Doctorate of Letters as part of this ceremony. Dr Chiu is a leading member of Sydney’s Malaysian and Chinese communities. He is widely recognised for his continuous service in many organisations within the Sydney Chinese community and his dedication to the promotion of friendly relationships between Australia and China. He is a supporter and promoter for world peace and for China’s peaceful reunification. Dr Chiu has been a great friend to the University of Western Sydney through his philanthropic support, in particular, the establishment of an Exchange and Study Abroad program. This program provides scholarships to support Australian students at UWS to travel to China. Dr Chiu’s generosity has been critical in helping UWS to develop closer relations with other universities in China, and to encourage and support students to pursue studies in Chinese language and culture. The University is pleased to be awarding Dr Thérèse Rein an Honorary Doctorate of Letters as part of this ceremony. Dr Rein founded her own company, Thérèse Rein & Associates (later Ingeus Ltd), to assist people with injuries or disabilities to become financially independent through suitable and sustained employment. Ingeus is now a transnational company with offices throughout Australia, the UK, France and Germany. Her commitment goes well beyond the business sphere. Dr Rein is dedicated to assisting the marginalised and disadvantaged to achieve a better quality of life. She has been particularly active in the fields of disability, homelessness and maternal health. Following her move to Canberra, after her husband, the Honourable Kevin Rudd, became Prime Minister, Dr Rein continued her contribution to public life, in particular, bringing together corporate leaders and social activists to exchange views and find common cause. In 2010, Dr Rein was awarded the Australian Human Rights Medal for her ongoing work and commitment to human rights, especially people with disabilities. The University is pleased to be awarding Dr Dorothy Hoddinott AO an Honorary Doctorate of Letters as part of this ceremony. Dr Hoddinott has been Principal of Holroyd High School in Greystanes, western Sydney, since 2005. She is a strong advocate for social justice, especially the human rights of refugees and asylum seekers. At Holroyd High, six of out ten students are refugees, and most arrive with no English. Many are illiterate and have never been to school. Dr Hoddinott and her colleagues at Holroyd High have worked hard to bring some normality to their lives and improve their educational opportunities. This commitment has transformed many of those lives, with many going on to gain university entry. In 2008, Dr Hoddinott was appointed an Officer of the Order of Australia for her career-long commitment to social justice and humanitarian issues, as well as her teaching of English as a second language and her contribution to leadership and professional teachers’ associations. 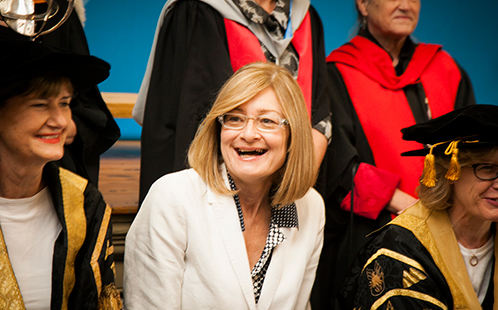 The University is pleased to be awarding Ms Emma Stein an Honorary Fellowship as part of this ceremony. Throughout her career, Ms Stein has served on a number of company and government boards as a non-executive director. She is also a Fellow of the Australian Institute of Company Directors. Ms Stein’s extraordinary contribution to UWS first began in 2004, when she became a member of the Board of Trustees’ Strategy and Resources Committee. She subsequently became Chair of that Committee following her appointment to the Board of Trustees. During her membership of the Board, Ms Stein also served as a member of its Standing and Remuneration and Nominations Committees. She resigned from the Board of Trustees in February 2013. Ms Stein has also made an outstanding contribution to the broader community as NSW Ambassador for the Guides and as former NSW President for the National Association for Prevention of Child Abuse and Neglect. The University is pleased to be awarding Dr Belgiorno-Nettis AM an Honorary Doctorate of Letters as part of this ceremony. Dr Belgiorno-Nettis is Executive Director of Transfield Holdings and many of its subsidiary companies, as well as a Director of Transfield Pty Ltd, Sydney Harbour Tunnel Ltd and Perisher Blue Pty Ltd. He is the founder of the newDemocracy Foundation, a not-for-profit organisation focused on political reform. He is Chairman of the Australian International Cultural Committee, and for the past 14 years was the Chair of the Sydney Biennale. Dr Belgiorno-Nettis has made a significant contribution to the arts and philanthropy at UWS. He has been the Chair of the UWS Arts Advisory and Promotion Committee since 2006. He has opened a number of exhibitions for UWS and is on the judging panel for the sixth UWS Sculpture Award and Exhibition. Dr Belgiorno-Nettis was made a member of the Order of Australia for service to the arts and to the community. 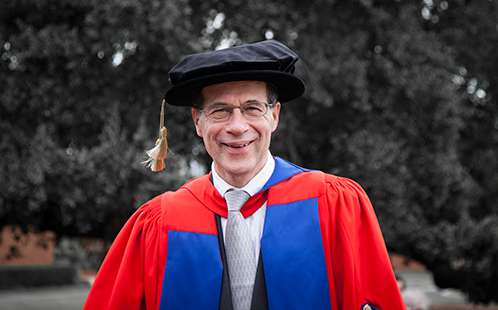 The University is pleased to be awarding Dr Bruce Bonyhady AM an Honorary Doctorate of Letters as part of this ceremony. Dr Bonyhady is Chair of the National Disability Insurance Agency. Over the last 25 years he has campaigned tirelessly to improve the lives of people with disabilities. As the father of two sons with disabilities, and an economist, Dr Bonyhady has taken on a range of influential volunteer roles and used his skills in funds management and insurance to find a solution to provide better care for people living with disabilities. Dr Bonyhady is best known as the driving force behind the Agency, applying his considerable skills to finding a solution to providing better care for people living with disabilities. And it is all the more a remarkable achievement, with the Agency not only supported by the whole of the disability sector, but by both sides of politics. In 2010, Dr Bonyhady was appointed as a Member of the Order of Australia for service to people with disabilities, their families and carers. 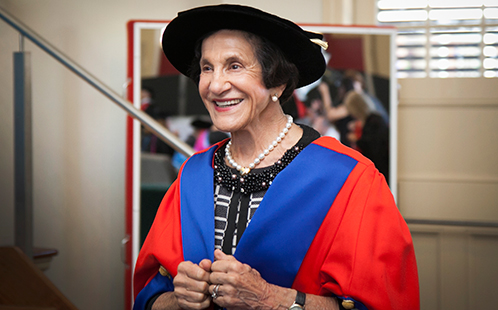 The University is pleased to be awarding Her Excellency Professor the Hon. Marie Bashir an Honorary Doctorate of Letters as part of this ceremony. Professor Bashir has been the Governor of New South Wales since 1 March 2001, and is the first woman to be appointed to that role. She has made a distinguished and lifelong contribution to Australian public life and in her professional service to improving mental health services. Professor Bashir’s widespread involvements and interests are extensive and diverse and include Indigenous health, juvenile justice, research on adolescent depression, health issues in developing countries, education for health professionals and telemedicine, and new technologies for health service delivery. Her list of awards is numerous and wide-ranging.  Professor Bashir is a National Living Treasure and an Honorary Commodore of the Royal Australian Navy. In 2006, Professor Bashir was invested by Her Majesty Queen Elizabeth II as a Commander of the Royal Victorian Order (CVO).

Each will also deliver a graduation occasional address.

UWS Vice-Chancellor, Professor Barney Glover, says each of the award recipients have made an extraordinary contribution to Australian public life in their own unique way.

“Whether it is service through education, philanthropy, business, the arts, social justice or public health, each of these Australians have sought to bring about positive change in the community,” says Professor Glover.

“The University of Western Sydney is very pleased to award these individuals with honorary doctorates and honorary fellowships, in recognition of their significant contributions to the advancement of knowledge and the betterment of our society.”

UWS April graduation is held at the UWS Parramatta campus.