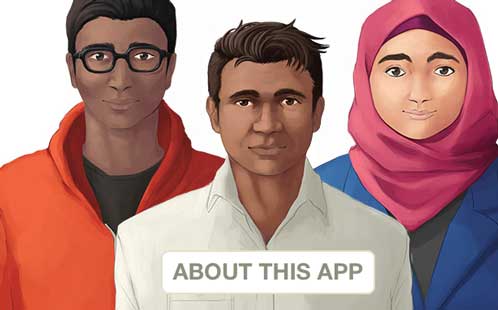 The University of Western Sydney will work with partners from Australia and around the world to further develop and grow a ground-breaking anti-racism app after it was awarded second place in a United Nations Award.

Developed in partnership with anti-racism NGO All Together Now, the Everyday Racism app was selected from over 600 applications by the United Nations and BMW as a finalist for the 2014 Intercultural Innovation Awards, which promote new ways organisations are contributing to peace and prosperity in the world.

The developers will now attend global training courses and workshops to expand the app, and will also join the UN Intercultural Leaders platform, a knowledge sharing initiative for civil society organizations and young leaders working to address cross-cultural tensions.

"This recognition is an honour for the Challenging Racism project team at UWS, and highlights our great achievements in providing solutions to help make racism history," says the Dean of the UWS School of Social Sciences and Psychology, Professor Kevin Dunn.

In the Everyday Racism app, players choose one of four characters - an Aboriginal man, a Muslim woman, an Indian student, or themselves. The app then shows them first-hand what it's like to experience racism, and builds confidence in the best ways to respond.

"Research from the University of Western Sydney has found it's crucial for people to take a stand to send the message racism is not okay and won't be tolerated," says Professor Dunn.

"In some cases people may be concerned their actions could make them unsafe or the target of further abuse, yet there is a range of possible ways to respond."

The 2014 Intercultural Innovation Awards were announced at the 6th Global Forum of the UN Alliance of Civilisations in Bali.

In addition to the Everyday Racism app, the University of Western Sydney is taking the lead in combatting racism in a number of other ways.

A new UWS project will see 200 staff and 100 students attend hands-on workshops throughout the year to learn the best ways to challenge racist attitudes in society.

"By conducting vital research into racism, and developing new ways to change our country for the better, the University of Western Sydney is taking the lead in promoting a tolerant society everyone can enjoy," says Professor Dunn.