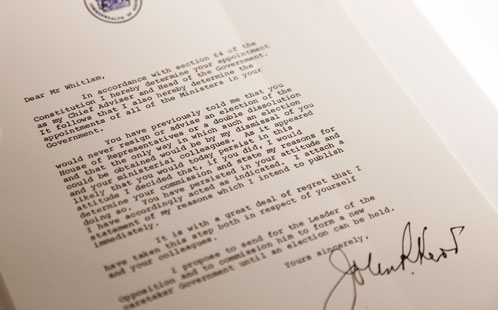 It's almost 40 years since the constitutional crisis of November 1975 which ended in the dismissal of Prime Minister Edward Gough Whitlam by the-then Governor-General Sir John Kerr.

On Saturday, September 20, the Whitlam Institute, home to the Whitlam Prime Ministerial Collection located at the University of Western Sydney's Parramatta Campus, is throwing open its doors for the first time and inviting the public for its Open Day.

Housed in the historic and newly-restored Female Orphan School at Parramatta on the UWS Campus, the Whitlam Institute is a leading national centre for dialogue, research and debate on public policy and an independent think tank.

In the Prime Ministerial Reading Room and A Changing Australia: The time of Gough Whitlam Exhibition, visitors will see the rarely seen original letter of dismissal given by the Governor-General to the Prime Minister as well as an extensive archive of papers and memorabilia from the Whitlam era. There will be a behind-the-scenes presentation by the Whitlam Institute's archivist on the treasures of the Prime Ministerial archive, how it's preserved and how it can be accessed by the public.

There will also be opportunities to meet Whitlam Institute Board members including Senator the Hon. John Faulkner, Patricia Amphlett, Nicholas Whitlam and Geoffrey Roberson.

The Open Day runs from 10:30 am - 2 pm. Admission and parking are free. The Whitlam Institute is accessible by public transport. Food and drink can be purchased on the day.

In addition, there are a number of limited edition collectable items signed by the Hon Gough Whitlam Whitlam AC QC which will be available for sale on the day.