The 2014 World Cup: A Brazilian perspective 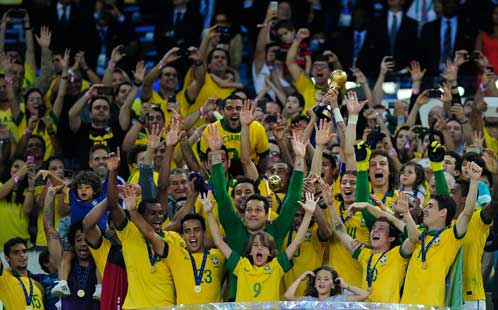 This opinion piece by Jorge Knijnik, from the Institute for Culture and Society, first appeared in The Conversation(opens in a new window).

My earliest and fondest World Cup memories are from the Mexico tournament in 1970. I was only a toddler, but I remember helping my family decorate the house and streets with national symbols and colours. I have a clear recollection that after every win of the magic team led by Pelé, Tostão and co., we sketched Brazilian flags and went to festive street marches to celebrate.

After the unforgettable win against Italy (4-1 in the final at Azteca stadium), I clearly recall sitting on my dad’s lap, beeping his car’s horn while parading through the São Paulo streets to celebrate our Seleção.

In 1970, Brazil was under a military dictatorship. General Médici ruled during the most repressive period of this dictatorship. From 1969 to 1974, censorship, kidnapping, torture, disappearance and killing of government opponents were widespread in the underworld of the secret police and the army. Médici’s authoritarian regime extinguished the urban and rural guerrilla. Carlos Marighella, one of the most prominent guerrilla leaders in Brazil, was murdered on São Paulo’s streets in 1969 during Médici’s reign.

Médici was a bloody dictator who used the Seleção to hide his evil regime. Anecdotal stories have it that he was a football lover and had a great knowledge of the game. Pictures of Médici with a small battery radio glued to his ear are part of the nation’s football psyche. The military made propaganda to go with the popular Seleção parades through Brazilian streets before and after returning from its winning Mexican journey.

In the course of the ‘leaden years’, many radical opponents of the dictatorial government – including current Brazilian president Dilma Rousseff – went underground to participate in the guerrilla movements which fought the military rule.

Aware that the authoritarian government was making political use of the Seleção, the guerrilla leaders made a decision: all insurgents would cheer against the Seleção; they wouldn’t comply to or help the regime’s propaganda.

However, during the matches something different happened. Fernando Gabeira, a former guerrilla who participated in the kidnapping of the US Ambassador to Brazil Charles Elbrick in 1969, narrates their conflicting story in his acclaimed book, O que é isso, Companheiro? (What the hell, mate?).

Gabeira says that the guerillas were all assembled in front of the TV, very quiet, watching a Seleção match, having firmly decided to support the opposition. But as soon as Pelé scored a goal, they couldn’t help but celebrate. Feelings towards the Seleção were stronger than their political will.

Celebrating the World Cup (a ‘Copa’) and the Seleção is a cultural tradition embedded in Brazilians' lives. Every four years, a few months before the tournament kicks off, people start to decorate the streets with the national colours, flags and street art to cheer on the team. Party arrangements are made.

The main question that everybody asks is: where are you going to watch the match? Even the people who don’t enjoy football take advantage of the official and unofficial holidays on Seleção matchdays to at least rest. When the Seleção plays in the World Cup, the country stops. Bank branches, schools, universities, courts – they all close to watch ‘the match’.

A few weeks ago, my dear friend Bill Murray came to Sydney to launch his most recent book, A History of Football in Australia: A Game of Two Halves (written with Roy Hay). While entertaining my family at dinner with his amazing football stories, Bill, also the the author of The World’s Game: a History of Soccer, told us that he spent the 1994 World Cup, hosted by the US … in Rio de Janeiro!

Bill wanted to feel the famous Brazilian mood during the Copa. He said he had never seen anything like it: the parties and the street decoration were fantastic; the mood was good – and his time to do research was restricted, as the city library closed in the middle of the day.

This year, though, the mood on Brazil’s streets is not the same. There is an anti-World Cup decoration ‘movement’. My friends tell me that the usual decorations have only just popped up in the last week, and are not very prominent. The joy of the World Cup is overshadowed with bitterness, revolt and anger.

Hosting the party at home has made everything very hard for Brazilians. The promise of the ‘world’s best party’ gave rise to huge social justice demands, and the forced relocations of marginalised communities amidst human rights violations and allegations of huge corruption disturbed the celebrations. The ‘people’ did not comply with the idealised role the authorities had for them – singing and dancing. They went to the streets to protest.

Protests and strikes are not new in World Cup host countries. A few days before the 1998 World Cup in France, Air France pilots went on strike. However, things are worse in Brazil, and among several, unorganised protests, the Homeless Worker’s Association (MTST) decided to act. The MTST is one of the most organised and organic social movements in Brazil. Since 1997 it has fought for urban reform that gives back the cities to the marginalised people.

A month ago, the MTST occupied an abandoned area close to the Itaquerão stadium, where the World Cup opening ceremony will occur in just a few hours. Ironically, it named that occupation Copa do Povo, the people’s World Cup. Just a few days ago, the well-organised activists marched towards the Itaquerão stadium. 20,000 protesters closed the stadium’s surrounding streets with a clear message: if the government does not listen to us, we will stop the opening ceremony.

After months of procrastination and lack of dialogue, the federal government quickly made a decision. As per the MTST’s demands, they included the whole association in the national housing program, ‘My House My Life’. The MTST leaders celebrated that achievement as a ‘people’s victory’. They promised not to disturb the opening ceremony.

On the other hand, the São Paulo state government used its well-known heavy hand to silence the recent metro workers’ strike. The state government commands one of the most violent military police forces in the country, and has made little progress to open a dialogue with the metro workers on strike, who are demanding not only better wages but also safer work conditions. São Paulo’s state government also faces serious corruption allegations in the construction of the city’s metro.

Protests have occurred even in the last week. A huge street demonstration occurred while the Seleção was playing its final warm-up match against Serbia. My local sources say that protesters were angry, but stopped protesting for a while to celebrate the Brazilian goal.

My Brazilian friend and feminist activist Sandra Unbehaum used a metaphor to explain to me the mood on the streets. For her, the moment is like when you’re hosting a huge party at your house, but just moments before your visitors arrive, your partner comes to you and says he wants the divorce. So during the event you have to pretend nothing has happened, although you can’t enjoy anything.

On the other hand, Sandra also says that the tradition of the World Cup sticker album has really spread across the country. On weekends, children, teenagers and adults assemble close to the newsagencies to buy and swap players’ stickers – it’s a blissful moment, she says.

Brazilian people’s feelings are mixed at the moment. The way the World Cup has been managed has brought anger and bitterness mixed with joy and happiness. Authorities have made sure that the host cities are well-protected: nobody has ever seen such a huge contingent of police, army and private security in Brazil’s cities. Since last week, federal ministers and even the president have been on TV every day to assure Brazilians that this World Cup will be the best ever.

Since Brazil won hosting rights 2007, I have had mixed feelings. I don’t agree with the process that those in charge put together to organise the event. But I can’t help joining in and cheering on the Seleção.