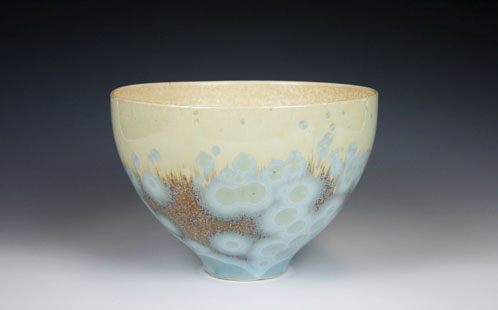 A new exhibition which features the works of artist Marilyn Walters and ceramicist Peter Wilson opens at the University of Western Sydney on Saturday, November 8.

Both Peter and Marilyn share a fascination with surface. This fascination is at once a quest to engage with a myriad of surfaces which describe the natural world, and at the same time, to be receptive to and to capture new surfaces.

For Peter the results of a firing yield exquisite combinations of hitherto hidden glaze effects. For Marilyn, it is the surface of a bay or stream which shimmers before a breeze, and hovers where light is liquefied and dust has life.

Marilyn's preoccupation with surface began with a study of rock carvings around Iron Cove in Sydney and in a host of locations in Ireland, England, Wales and Scotland. The location of these carvings at river mouths and near sacred wells and springs prompted a further interest in the cultural significance of water courses and the patterns employed to illustrate them. These specific instances combine with the effects of reflected light and the intricacies of life forms which inhabit the water's surface.

For Peter, the work in this exhibition is a response to founder of the Arts and Crafts movement, William Morris's call to consider the design, the nuance of form and the timeless sense of tradition and history within ceramics. His body of work will consist of a continuous refinement of form and glazed-surface such that both elements form an integrated whole. It will feature the results of his ongoing experimentation with both glaze and form.

A special event to mark the opening exhibition takes place on November 8 at 2.00 pm – 4pm.RSVP for the opening by Wednesday, November 5 to Rosemary Hopkins.