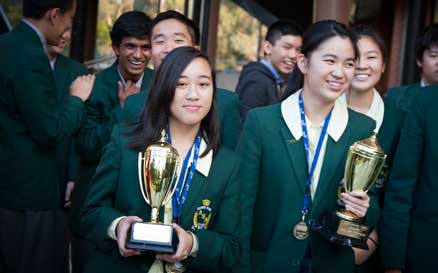 Cheered on by family and supporters, 124 of our best and brightest Year 10 students from 48 schools convened at the University of Western Sydney's School of Medicine to compete in the State Finals of the Australian Brain Bee Challenge.

This annual event saw individuals and team competitors battling it out for the ultimate prize of Brain Bee NSW State Champion. The students were asked questions on topics relating to the human brain such as intelligence, memory, emotions, sensations, movement, stress, sleep and addiction.

Professor Vaughan Macefield, from the UWS School of Medicine and NSW Coordinator of the Australian Brain Bee Challenge spoke about the importance of the competition and congratulated all this year's contestants.

"The level of competition this year was truly encouraging. We need more young people who want to enter into the challenging world of neuroscience so it's incredibly important that we continue to nurture their interest and curiosity about Science. The Brain Bee competition is one way we can help to do that," he said.

The NSW State Champion Jade Pham, will go on to compete at the national titles held next year at the Australian Neuroscience Society  meeting in Western Australia. The winner of that competition goes on to represent Australia at the International Brain Bee Challenge.

In addition to the thrill of competing, the first, second and third place individual winners received iPods and neuroscience books donated by UWS and a conditional scholarship valued up to $20,000 to study at UWS. The winning team were given neuroscience books for their school, with members of the team also receiving iPods form UWS.