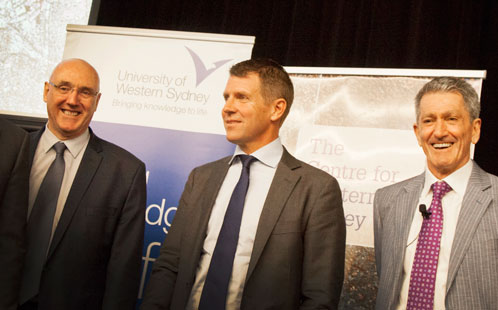 The University of Western Sydney has opened the Centre for Western Sydney, a new initiative to forge partnerships with government and the Western Sydney community to address the region's growing research and policy needs.

Western Sydney is Australia's fastest growing urban region. Currently home to two million people, another million people will be added to the region over the next 20 years.

"Western Sydney is the heart of our state and with a million extra people expected to move to the area over the next 20 years it requires our focus," says Mr Baird.

"I congratulate the University of Western Sydney for having the foresight to open the Centre for Western Sydney and I am sure the state will be the richer for it."

"The pace of growth in Western Sydney needs to be managed in ways that ensure positive economic and social results for the local residents, as well as improved environmental outcomes for the region," says Professor O'Neill.

"The infrastructure construction over the next twenty years in Western Sydney will be one of the most significant in Australia's history," says Professor O'Neill.

"A range of new infrastructure projects are planned for Western Sydney, such as the new airport at Badgery's Creek, the WestConnex freeway link, and the North West and South West rail expansions."

"There is also new social infrastructure spending, especially for health and education services, and these projects need to be handled carefully as there is so much at stake."

The Centre for Western Sydney will facilitate better public access to the University's vast research and policy development activity. By delivering quality data and information, the Centre will become a vehicle for informed and constructive debate.

Professor O'Neill says the University has a proven capacity for research and development, and the Centre will help direct these institutional capabilities to address the region's policy needs.

"For too long Western Sydney has been portrayed as a region of planning crisis and inadequate infrastructure provision," says Professor O'Neill.

"We need to work with business and government to generate new policy insights, and the Centre will help bring all the available resources together to address the challenges of the region in innovative ways."