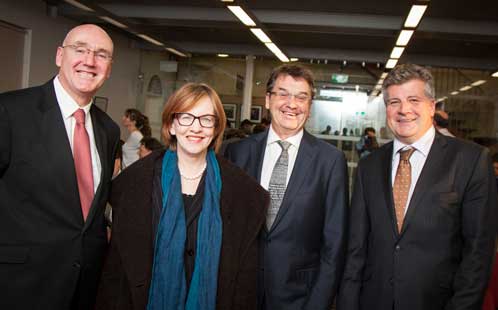 An Australian project led by the University of Western Sydney is connecting researchers from across the country in a virtual lab of the 21st century, where academics can access vast amounts of raw data and run real time analyses in the Science of Human Communication.

Alveo is a collaboration between 13 universities and 3 government bodies to bring large amounts speech, music and video data into a powerful online platform academics can access from the comfort of their own computers.

By giving researchers easy access to vast stores of valuable social and linguistic information, the University of Western Sydney is providing a valuable portal into the future of language and communication research.

Alveo takes advantage of digital technology to grant academics access to a wide range of databases, and allows them to run large amounts of data through real-time analyses with their choice of analysis tools. Researchers can then document their results in an online annotation system, giving other academics instant access to new findings.

"Speech and language research is growing ever more crucial as modern society moves from the keyboard to voice recognition, yet on the other hand globalisation means that more languages are becoming endangered every day," says the Director of the UWS MARCS Institute, Professor Denis Burnham.

"By throwing open the doors to the incredible amounts of data accrued by universities and institutions across the country, and designing ways to gather even more new data - even from remote or mobile locations - we are giving Australia the best chance to be at the forefront of these new technologies, while also gathering crucial information about languages under threat."

Funded under the Australian Government NeCTAR program, Alveo brings text, video and audio information from 7 large corpora including AusTalk, which includes recordings of 3 hours of speech from each of 1,000 adults across Australia to showcase the diversity of accents and intonations. In addition, 11 different analysis tools have been incorporated to allow novel data-tool pair ups.

The stage is now set to incorporate data from special groups, such as stutterers or children with autism, so that more intricate research questions regarding such conditions can be posed and  answered, and intervention and remedial programs devised and implemented.

Professor Burnham says research in the future must go beyond the secluded desk-PC-lab-university-bound model to eradicate the waste involved in repeated unshared analyses. Alveo will dramatically improve scientific replicability by moving corpora and tools and the analyses conducted with these into an easy access, shared, in-the-cloud environment.