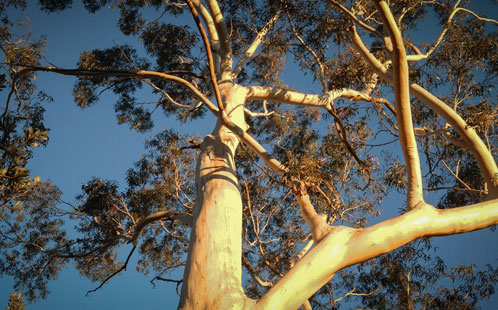 Eucalypts are a defining and distinctive feature of the Australian landscape. Large and small, we think of these hardy and adaptable trees as being at home in a variety of environments across the nation ranging from hot and dry coastal areas all the way through to cooler mountain and alpine regions.

But as the planet continues to warm, scientists are concerned these much-loved national symbols are increasingly coming under threat in some areas more than others as climate change increasingly creates a mismatch between forest trees and their home environments.

In a paper published last week in the journal Global Change Biology, lead author Dr John Drake, from the Hawkesbury Institute for the Environment at the University of Western Sydney and his colleagues report that as temperatures increase, eucalypts growing in already warm locations are likely to be more negatively affected by increased warming compared to cooler climate eucalypts that experience increased warming in their home environments.

To test their predictions, the research team conducted a climate shift experiment using 21 seed varieties grown in a series of climate-controlled glasshouses which approximated summer conditions occurring in the seeds' areas of origin.  The researchers compared these home-grown plants to those grown with an additional warming treatment of 3.5 degrees C.

"The eucalypts survival depends on their ability to adjust physiologically to higher temperatures and what we can see is that increased warming in already warm places is likely to affect eucalypt trees more adversely than increased warming in cool places," Dr Drake says.

The eucalypt research results have wider implications for the survival of other warm-origin plants and trees, says Professor Mark Tjoelker, a UWS researcher who also worked on the project with Dr Drake.

"Cool-origin plants likely have the flexibility to alter physiological and structural traits to cope with warming, while warm-origin plants are likely to be constrained in their ability to alter traits. These results have widespread implications for the survival and persistence of other warm-origin trees. In addition, increased water stress in warm areas experiencing drought are likely to accentuate already negative effects even further," says Professor Tjoelker.

The research for this project was supported by an ARC Discovery grant with additional support from the Hawkesbury Institute for the Environment and the University of Western Sydney.