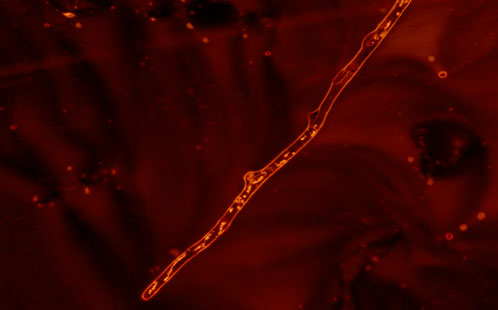 The fungus (Trichophyton rubrum) appearance under the fluorescence microscope after uptaking the rose bengal dye.

For many people, fungal nail infections are a common and annoying problem. Fungi love warm, moist environments such as swimming pools and showers so it's no surprise that toes are often their favourite target.

Now, a new photodynamic laser therapy being developed by a researcher at the University of Western Sydney could revolutionise the way we treat this age-old problem.

Currently, there are a variety of topical treatments used for treating fungal infections. However, many are highly toxic, take a long time and often don't work effectively because our nails block the treatment from reaching its target. Moreover, commonly used treatments often require repeated applications and sometimes, removal of the nail.

In recent years, new laser treatments developed to treat fungal nail infections have been more effective. However, because they operate at the higher end of the light spectrum, they generate significant heat which not all patients are able to tolerate, says Dr Antonio Lauto who developed the new technique which involves the use of a green light laser at significantly lower temperatures.

Dr Lauto turned to photodynamic therapy which uses light-sensitive chemicals that are absorbed by the target cells to overcome these challenges. Once the chemical is inside the cells, the area is exposed to a light-triggering chemical reaction and ultimately the destruction of the targeted cells occurs.

"Photodynamic therapies using lasers or other light sources have been in use for years, but this is the first time this particular laser technique has been applied to killing the fungus that can infect your skin," Dr Lauto says.

In the lab, Dr Lauto experimented on one of the most common fungus to infect human skin and nails, Trichophyton rubrum (T. rubrum), which feeds on keratin-rich areas of the body.

The fungus easily absorbed rose Bengal, a relatively harmless light sensitive or photo-reactive dye which is often used to stain samples for viewing under a microscope.

After allowing 30 minutes for the rose Bengal to be absorbed, the samples used by Dr Lauto were exposed to a green laser on a low power setting for five minutes.

"When the laser or LED light shines on the fungus containing rose Bengal, free radicals and reactive oxygen molecules are produced which "rust" and destroy the membrane of the microorganism, says Dr Lauto who published his initial research in the Journal of Biophotonics.

"The fungi cells and, importantly the spores that could trigger reinfections, are both destroyed by the therapy in one treatment," Dr Lauto says.

While experiments have so far been performed in the lab, the next stage will be human trials which are currently underway in Europe with results likely to be finalised in six months to a year.

"This could herald a new, less painful and easier to manage treatment for fungal nail infection," Dr Lauto says.

"With further research, photodynamic therapy may provide an alternative treatment for fungal infections which is safe, fast and effective in just one treatment without removing the nail."