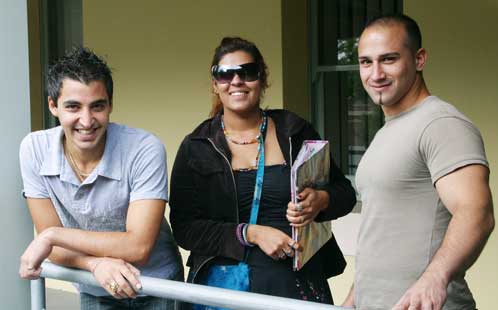 The following opinion piece by Dr Benjamin Jones from the School of Humanities and Communication Arts was originally published by The Conversation.

The culture wars that dominated the narrative during John Howard's prime ministership have returned with the ascension of his self-described "political love child", Tony Abbott. While Abbott is sometimes lampooned as Australia's version of gaffe-prone US president George W. Bush, the consistency and clarity of his controversial interpretation of Australian history suggests it is deliberate and considered.

Howard lamented the so-called "black armband" version of history. He resisted intense pressure for a formal apology to Indigenous people. Howard insisted that his government and contemporary Australians could not and should not say sorry for past transgressions.

Abbott is now using his prime ministerial influence to challenge the new orthodoxy that sees January 26, 1788, as the beginning of Aboriginal dispossession rather than a cause for national celebration.

This year, in the lead-up to Australia Day, retail giants Aldi and Big W were compelled to remove T-shirts with the slogan "Australia: Est 1788". The blatant Euro-centrism of the message and the failure to recognise over 50,000 years of Aboriginal culture attracted a stinging backlash.

In July, however, Abbott credited the British government with creating Australia, stating initially that the country was "unsettled" before 1788 before correcting himself to "barely settled". Were it a simple gaffe (or a Clintonian case of misspoke), Abbott's minders would have gone into damage control and made sure it was not repeated. Instead, Abbott reinforced the sentiment last Friday, when he declared "The First Fleet was the defining moment in the history of this continent." In case there was any ambiguity, Abbott continued. "Let me repeat that, it was the defining moment in the history of this continent." Far from a gaffe, this must be recognised as a conscious effort to rescue January 26, 1788, from negativity and return it to the focal point of national celebration it was as recently as 1988.

Australia's Bicentennial was perhaps the grandest national celebration the country has ever witnessed. Even so, there was great confusion over how to appropriately mark the occasion. For republicans, the prominence of visiting royals Charles and Diana was regressive. For many Australians, 1988 was the first time they considered that what some call Australia Day is also called Survival Day or Invasion Day. No-one would question the significance of this day in Australian history. But is it really the moment that defines Australia as a nation? Outside of the long-dead imperial embrace, do Australians even know how to define themselves?

Howard suggested in 2003 that "as a nation we're over all that sort of identity stuff." The palpable unease with which Australians observe their official national day suggests otherwise.

January 26, 1788, was the day a British convict colony was established on Aboriginal land and renamed New South Wales. There was no treaty, no democracy and no sense of being Australian. The very name would not be popularised by Matthew Flinders for decades.

Outside the prism of British race patriotism, it is hard to comprehend how this could be the moment that defines us as a nation.

If not 1788, then when is Australia's defining moment? January 1, 1901, perhaps? That's a popular candidate, except all aspects of Federation point to a celebration of Britishness. Officiated by British royals, Federation brought six British colonies together to form a Commonwealth, which by 1907 was declared a dominion of the British empire. Things like Australian citizenship, Australian passports and Australian foreign policy did not exist and would not for decades.

From a legal point of view, Australia simply does not have one defining moment but rather a century-long disengagement. Australia ratified the Statute of Westminster in 1942 to become an autonomous member of the British empire. Australia adopted its own flag in 1954, albeit one based on a 1901 competition that specified the imperial connection must be included.

Australia replaced imperial knighthoods with the Order of Australia in 1975, although Abbott has brought back knights and dames. Australia eventually settled on its own anthem in 1984. The 1986 Australia Acts severed any parliamentary links between Britain and Australia.

January 1, 2001, was touted as the final piece of the puzzle when Australia would finally replace the Queen with a local head of state and become constitutionally independent of any other nation. With the No camp powerfully supported by monarchists Howard and Abbott, the 1999 referendum on becoming a republic failed. We remain with a foot in both old and new Australia. Independent identity emerges

Australia may not have a neat date from a legal point of view, but perhaps Australians can find a defining moment in their cultural history. The Liberal governments of the 1960s slowly dismantled the White Australia policy before Gough Whitlam's government removed its final remnants in 1973. Whitlam's charismatic immigration minister, Al Grassby, definitively declared:

Grassby introduced the term multiculturalism to the Australian political lexicon and it became the government's official policy. Following the Whitlam dismissal, the incoming Liberal government of Malcolm Fraser kept and strengthened the policy. This was demonstrated most dramatically in the wake of the Vietnam War when thousands of Vietnamese asylum seekers arrived by boat and were resettled.

Australia passed a nation-defining moral test in the 1970s. Having rejected the inherent racism of White Australia and abandoned the desire to create a homogenous British mono-culture, Australians opened their arms and hearts to a new philosophy that sees the beauty in diversity.

Racism still exists, of course. The ideas of Pauline Hanson and, more recently, Geert Wilders, do hold niche appeal but it is exactly that: an extreme and minority view. Overwhelmingly, multiculturalism has been an Australian success story.

1788 was not our defining moment. Rather, some two centuries later, we let old Australia fade into history and took our first steps into the new.

Through social pressure and political leadership on both sides, we decided that in new Australia our neighbours could be the Smiths or the Nguyens. Multiculturalism has brought to Australia a richness and diversity that Arthur Phillip and his reluctant fellow voyagers could not have fathomed.

As I stand before my classes in Bankstown, Parramatta and other suburbs of western Sydney, I see smiling faces from every background imaginable. I see the next generation of Australian leaders and am thankful to live in a multicultural society.

Perhaps we do not need to go back to the days of empire to find our defining moment. Some 40 years ago, we took a bold stand as a nation and we see the benefits of it every day.