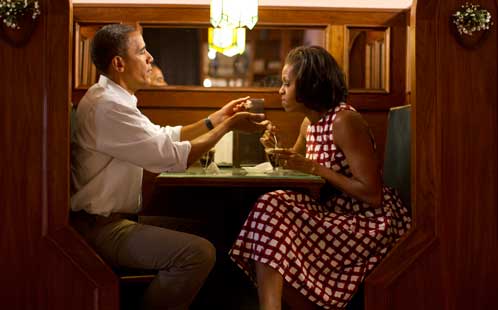 Two stunning exhibitions – one photographic and the other a series of black and white illustrations – representing changing approaches to politics over the years are now on display at the Margaret Whitlam Galleries in the Female Orphan School at the University of Western Sydney.

Imaging Australia in Black and White: Newspaper Illustration 1880 – 1940 is a collection of original drawings, prints and paintings by 20 influential artists drawn from popular media of the period. Curated by UWS academic Dr Janine Sager, this touring exhibition supported by the Royal Australian Historical Society is drawn from a remarkable collection accumulated by talented Bulletin artist Herbert Moffitt, whose bohemian circle of friends and acquaintances included many of those who helped to define a sense of national identity in Australia.

Moffitt and the other artists of his era understood the importance of developing a visual culture that reflected who we are as Australians, and importantly, the power of the press in distributing that image in the form of comic drawings and illustrations across the vast continent to unite the Australian born population as they endeavoured to see themselves as a united nation.

A second exhibition, The Presidents: from JFK to Obama is an Australian Centre for Photography Touring Exhibition featuring the work of leading American photojournalist David Burnett. Burnett is one of the very few to have photographed every US President since John F. Kennedy.

Spanning five decades, Burnett’s photos cover key moments in history. His images bear witness to the changing American political landscape from the days of candidates politicking on a chair in the kitchen during the 1960s and 70s, to the tightly managed access of today in the age of media, smartphones and the 24-hour news cycle.

These moments of history provide a fascinating close-up into the world of the Kennedy administration of the early sixties to the downfall of Richard Nixon in the 1970s and finally to the ground breaking election of America’s first black President, Barack Obama.

Photographer David Burnett began working as a freelancer for Time magazine, and later for Life magazine in the 1960s. He co-founded Contact Press Images in 1976 and has worked in over 70 countries. His many awards include the Robert Capa Gold Medal, multiple World Press Photo Awards and the World Press Photo of the Year.

Both exhibitions are on display at the Margaret Whitlam Galleries within the historic Female Orphan School on the Parramatta campus of the University of Western Sydney. These exhibitions are hosted by the Whitlam Institute and run until July 25, 2014.

The Margaret Whitlam Galleries are open on Thursday’s and Fridays from 10am – 4pm. Admission is free.