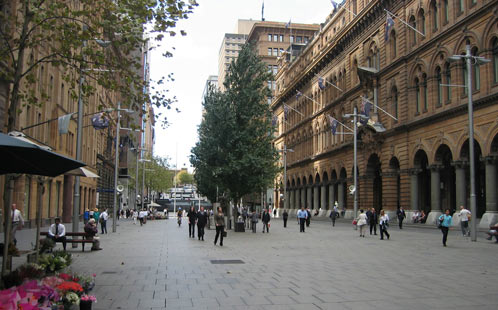 Law graduates from the University of Western Sydney have successfully defended a homeless man from prosecution and in the process stood up for hundreds of people sleeping rough who find themselves without a voice.

A year after the Occupy Sydney protests, new laws were created to prohibit ‘camping and staying overnight’ in Martin Place, which had the necessary effect of discriminating against ‘homeless people’ who had slept in the Martin Place area for years.

Representing Lance Priestley, a homeless man charged under the laws, barristers Angus Stewart and Jason Donnelly challenged the legal validity of the laws all the way to the New South Wales Court of Appeal.

The case was first heard in the Local Court of New South Wales, where UWS law graduate and barrister Louie Christoff successfully argued Mr Priestley had left Martin Place for more than an hour before returning, and as such wasn’t in the prohibited area the entire night.

UWS law graduate Jason Donnelly, who had then taken over the defence in the Supreme Court before Justice Adams, argued the laws themselves were invalid, irrespective of how long Mr Priestley had left Martin Place.

“The words ‘staying overnight’ were too ambiguous and uncertain to ever have a lawful construction which could apply to members of the public,” says Mr Donnelly.

“This latter argument was accepted by Justice Adams in the Supreme Court of New South Wales”.

In the New South Wales Court of Appeal, Mr Donnelly was led by Angus Stewart, who played a significant role as Counsel in both representing and contributing to the success of the appeal proceedings in favour of Mr Priestley.

The judgment has set a precedent, to the extent that NSW lawmakers cannot seek to criminalise conduct for ‘staying overnight’ in a particular area.

This means that local councils and lawmakers in New South Wales who have sought to criminalise “staying overnight” in a public area will have no legal force.

Mr Donnelly says it’s a significant decision for homeless people in Sydney, as they will not be able to be found guilty of having ‘stayed overnight’ in the Martin Place area.

“It also sends a clear message to lawmakers that if they want to impose new criminal sanctions the laws must be clear in their meaning,” he says.

The Dean of Law at the University of Western Sydney, Professor Michael Adams, says it was a David vs Goliath struggle in court.

“Considering our graduates were facing teams of government lawyers, it’s a significant victory and shows the quality of our law program at UWS,” he says.

“I’m very proud of Mr Donnelly and Mr Christoff and the way they have used their skills to pursue social justice against the odds.”