Julia Gillard: The politics, the policies and a very public life 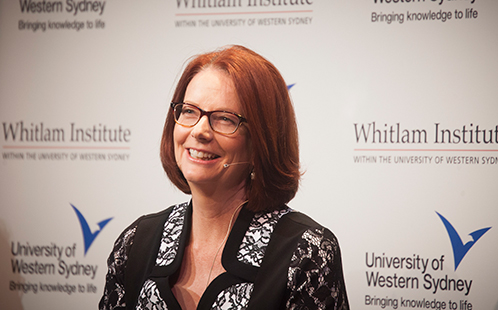 The Honourable Julia Gillard visits a full-house in Parramatta.

Former Prime Minister Julia Gillard reflected on her time in public life: the policies, the issues and the experiences that defined her time in the cauldron of Australian politics, from her election as the member for Melbourne on 3 October 1998, through her term as Australia's 27th Prime Minister and her departure from Parliament on 7 September 2013, at a special Whitlam Institute event at Parramatta Riverside Theatres.

The Whitlam Institute within the University of Western Sydney is committed to public conversation and is delighted that the Honourable Julia Gillard explored her story of the road to reform, within the intimacy of the Riverside Theatre's Lennox Theatre.

Many may think they know the 'Gillard story' but the publication of the Honourable Julia Gillard's memoir 'My Story' offers us an opportunity to step back and to reflect with her on our country's recent history and its ramifications.

While the political drama of Julia Gillard's ascent to the Prime Ministership, the leadership wars and the theatre of the hung parliament dominated her term as Prime Minister, there has been meagre consideration of the nation-changing policies she drove, nor of the barriers to reform for contemporary Australian governments. Yet the legislative and policy record demands attention: education reform at every level from pre-school to university; an emissions trading scheme; health care, aged care and dental care reform; commencing the nation's first ever national scheme to care for people with disabilities; restructuring the telecommunications sector and embarking upon a national broadband network; foreign policy re-alignment with Australia's guiding policy paper, Australia in the Asian Century and a re-orientation of Australia's alliance with the United States and our relationship with China.

The Gillard Government secured Australia's election to the United Nations Security Council. Behind these reforms lie disappointments, frustrations, base politics and a more profound struggle about the type of Australia we might want and our nation's place in the world.