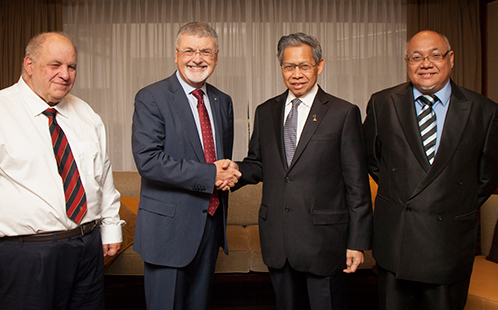 A partnership between the University of Western Sydney and the Bumiputra Malaysia Solar Fabricators Association (BuSFA International) of Malaysia will support the commercialisation of new technologies and build the skills needed to increase renewable energy supplies for both nations.

The partnership capitalises on unique solar energy technology research underway at the University of Western Sydney and also brings new international education exchange programs under a new agreement between UWS and BuSFA.

UWS Chancellor Professor Peter Shergold says he welcomes the Memorandum of Understanding, which marks a further strengthening in the relationship with BuSFA International.

The MoU was signed in the presence of the visiting Malaysian Minister for International Trade and Investment, The Honourable Mustapa Mohamed,  in Sydney.

"UWS is committed to fostering a long and prosperous relationship with BuSFA International. Through collaborative education, research and commercialisation projects, both

Malaysia and Australia will build the skills and technologies needed to increase their renewable energy supplies," says Professor Shergold.

"We need to reduce by 40 percent our carbon emissions in Malaysia by 2020 and this agreement will help us reach this goal," says Mr Ismail.

He says UWS solar research holds great potential to fill a gap in Malaysia's transition to renewable energy and BuSFA International is eager to assist with its further development and commercialisation.

UWS solar researcher, Professor Janusz Nowotny, has been instrumental in building the partnership, which will also provide PhD scholarships, training for future renewable energy specialists and the production of a textbook on sustainable energy systems.

"The Memorandum of Understanding formalises already very active collaborations with BuSFA International," says Professor Nowotny, from the School of Computing, Engineering and Mathematics.

Professor Nowotny and colleagues in the UWS Solar Energy Technologies Research Group are working to increase the efficiency of a unique technology to convert water into hydrogen fuel.

Titanium dioxide or TiO2 is a cheap and abundant compound that will be used as a raw material in the development of functional elements, such as photoelectrodes. Through complex processes the UWS team creates finely tuned defects in the TiO2 which transforms it into a 'photocatalyst' – a material that can trigger reactions when exposed to light.

The photosensitive TiO2 the researchers manufacture has extraordinary capabilities. It reacts with water, when exposed to sunlight, to produce hydrogen – an environmentally clean fuel. It can also be used to purify water, into clean drinking water. The TiO2 does not degrade in the photochemical reaction and can be reused almost infinitely. Sunlight and water are the only inputs needed to trigger the reaction.