Incredible expedition across the Pacific comes to UWS 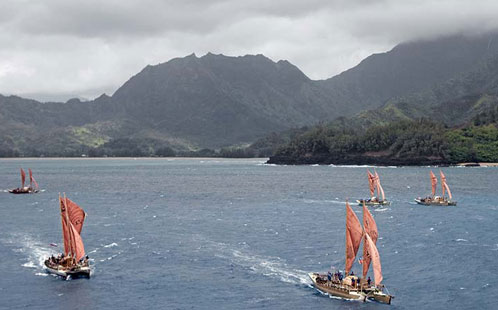 After an incredible expedition spanning four countries and nearly ten thousand kilometres, sailors from across the Pacific will discuss their journey and mission to unite the region to take action on climate change at a University of Western Sydney event.

To understand how climate change and globalisation is affecting the south Pacific, sailors from countries across the region including New Zealand, Samoa and Fiji travelled to Sydney on traditional boats.

After gaining a firsthand look at the ocean and islands during the gruelling journey, called the Mua Voyage, the crew will attend the International Union for the Conservation of Nature's World Parks' Congress to plead for urgent action to protect the region's biodiversity.

To discuss their mission and journey, the crew of the Mua Voyage will be at the University of Western Sydney's Werrington South campus on Wednesday November 19 at 10.30am.

Dwain Qalovaki form the Mua Voyage says there needs to be a unified approach from all countries in the Pacific.

"During our journey across the Pacific there were many sad sights, from dead turtles trapped in enormous piles of plastic, to the degradation of small islands," says Mr Qalovaki.

"We will be taking this documentary evidence to the World Parks' Congress to make a Pacific call for global action on issues affecting this part of the world."

"In order to protect and sustain the Pacific islands for future generations, we need to unify and make commitments now, not in the future," says Dr Ravulo.

"Climate change is not just having an impact environmentally, but socially. Families are now being forced to move from traditional lands due to raising sea levels, subsequently creating a cohort of displaced and homeless people across the Islands."

"By coming to this event and hearing the truth about what is happening to our beautiful oceans and islands, and how you can help, everyone can make a difference."