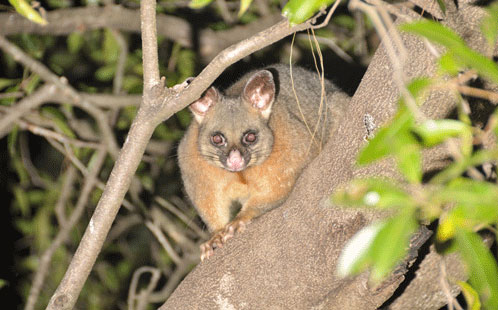 Frisky young male possums from North Queensland need to live fast because they are likely to die young, according to a new study published this week in the international journal PLOS One.

The researchers found that young male brushtail possums, in their quest to find females, are spending more time roaming around and thus are falling prey to carpet pythons at high rates. They observed that 60 per cent of the young males followed in the study fell prey to pythons compared to 20 per cent of females.

But, in response to the high likelihood of being eaten, these males have adopted a strategy to maximize their reproductive success during their short lifespans – they grow up fast and reproduce early.

The researchers found that contrary to previous studies of possum populations in southern Australia and New Zealand where older male possums were the most reproductively successful, these young possums who have a higher likelihood of being eaten, mature earlier so they don't miss out on mating opportunities. Genetic studies confirmed that this risk-taking behaviour has a pay-off: the researchers found that the young male possums were more reproductively successful than their older counterparts.

"Our results suggest that the high likelihood of being eaten means that male possums in the tropics adopt a faster life history strategy to avoid missing the opportunity to mate. The results support our hypothesis that in populations of possums that experience high predation pressure, male possums have altered their mating tactics and reach sexual maturity at an earlier age," says study leader Dr Jane DeGabriel.