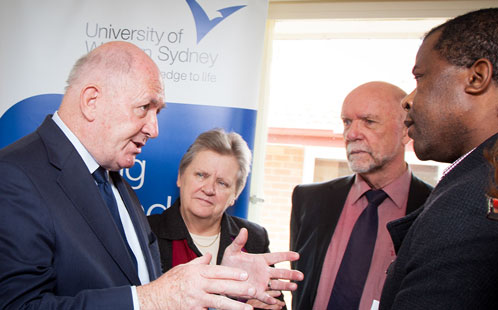 The Men's Health Information and Resource Centre (MHIRC) at the University of Western Sydney recently welcomed the Governor-General, His Excellency General the Honourable Sir Peter Cosgrove AK MC (Retd), Governor-General of the Commonwealth of Australia, and Her Excellency Lady Cosgrove, who visited the MHIRC to learn more about its work to improve men's physical and mental health.

On Wednesday 15 October the Governor-General and Lady Cosgrove visited the 'Shed' at Mt Druitt – a men's drop-in centre which is a joint initiative between UWS, local service providers, the Holy Family Centre and local Aboriginal and Torres Strait Islander elders.

They then travelled to the UWS Hawkesbury campus to meet with the MHIRC staff and its supporters, including Deputy Vice-Chancellor, Ms Rhonda Hawkins, and Deputy Chancellor, Gillian Shadwick.

Director of the Men's Health Information and Resource Centre, Professor John Macdonald, says he and his colleagues were honoured by the visit.

"Such a visit is wonderful recognition for the Centre, which aims to promote the health of boys and men, with a particular focus on men from socio-economically disadvantaged backgrounds including Indigenous men," said Professor Macdonald.

"The MHIRC emphasises the importance of the social and economic context of men's lives - where they work, live and love - and what impact it can have on their health.

"There can be many socio-economic reasons underlying men's health, and we shouldn't look to blame them for their poor health outcomes. Rather, by supporting men, and connecting them with the right levels of practical support in their community, we can help them to make a real difference to their health and wellbeing."

He said it is particularly pleasing that the Governor-General and Lady Cosgrove had the chance to meet with clients of the highly-successful 'Shed' at Mt Druitt - a drop in centre for at-risk men from all walks of life, which is run by and for Indigenous men.

Professor Macdonald said the 'Shed' – which recently celebrated its 10th anniversary – works by connecting men with services in the community such as public housing providers, legal services or financial counsellors, and is led by Coordinator, Mr Rick Welsh.

The Commonwealth Department of Health and Ageing has funded the project since 2004 from money available in the National Strategy for Prevention of Suicide initiative.