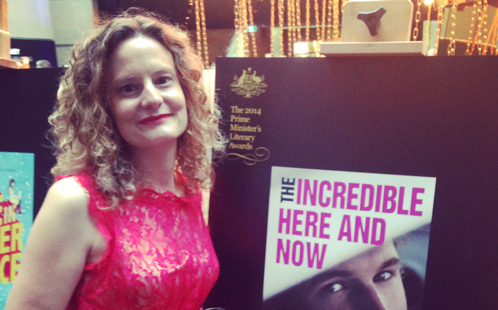 The Incredible Here and Now is a coming of age story about a young man enduring the most incredible and the most difficult year of his life. It is told in vignettes that capture the extraordinary moments in the most seemingly ordinary places.

Felicity Castagna is a Doctor of Creative Arts candidate at the UWS Writing and Society Research Centre, and has previously been shortlisted for the NSW Premier's Literature Awards, the WA Premier's Book Awards and The Children's Book Council of Australia Book of the Year Award.

She says the award came as a total shock.

"When my name was read out it was my most incredible experience as a writer, especially considering the quality of the shortlisted books," she says.

Ms Castagna says The Incredible Here and Now was inspired by a decade of living and working in Western Sydney.

"The book draws on the voices of the diverse young boys I've met while teaching in high schools, workshops and tertiary institutions in Western Sydney," she says.

"I also spend hours a day walking the streets of Parramatta with my young son, and I wanted the book to establish the city as a character as much as any of the other characters."

Publisher Alice Grundy, from the UWS School of Humanities and Communication Arts, says the Prime Minsters Literary Award is a recognition of Felicity's incredible talent, and Giramondo is delighted to have published her book.

"It was our first ever Young Authors title and something of a risk, but we believed in the innovative writing and the sensitive portrayal of adolescence and of place," she says.

"It's also further proof of the fertile environment at the Writing and Society Research Centre at UWS."

"On behalf of everyone at UWS and Giramondo, I congratulate Felicity Castagna on this fantastic achievement."