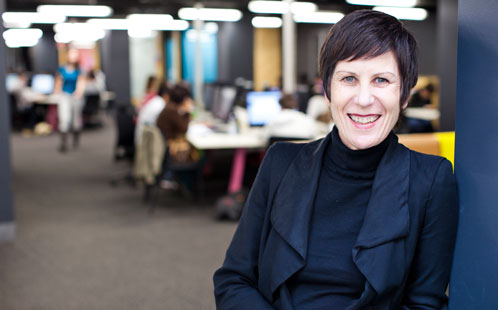 Professor Kirkpatrick joins UWS from the University of Adelaide, where she is currently the Pro Vice-Chancellor (Student Experience). She will officially take up her role in January 2015.

A highly–regarded academic and senior manager, Professor Kirkpatrick has been at the forefront of developing strategies to enhance teaching and learning at many of Australia's leading universities, and has led major projects designed to invigorate the academic program and improve the student experience.

In particular, she brings to UWS extensive knowledge and experience in developing open, distance and e-learning initiatives at universities such as Monash University, the University of New England, and Charles Sturt University, as well as internationally, having been Pro Vice-Chancellor (Learning, Teaching and Quality) at the Open University UK.

Vice-Chancellor Professor Barney Glover says Professor Kirkpatrick joins UWS at an exciting time, as the University expands its international horizons and prepares to launch its own online courses for 2015, which have been developed in partnership with Open University UK.

"On behalf of the UWS community, I welcome Professor Kirkpatrick and look forward to working closely with her in the future," says Professor Glover.

"In particular, she will play a pivotal role in leading the University's academic program and launching UWS Online next year. Developing a suite of fully online degrees is a major undertaking for UWS, offering students from Greater Western Sydney and from across Australia full online flexibility with their studies, along with comprehensive online and campus-based support.

"Professor Kirkpatrick's experience in developing programs that recognise and support students' wide-ranging needs, coupled with her international leadership in the field of online education, will be invaluable."

Professor Kirkpatrick says she is looking forward to taking up her role in the new year.

"UWS has great academics and has developed a very strong reputation for high-quality teaching and learning," says Professor Kirkpatrick.  "I am excited by the University's potential. I am looking forward to ensuring that we maintain our position as a leading contemporary Australian university, which is strongly connected with its local communities.

"As Deputy Vice-Chancellor (Academic) I look forward to becoming part of the University's communities, and making a real difference for our students and the Greater Western Sydney region."