ARC grant to open new window on a hidden world 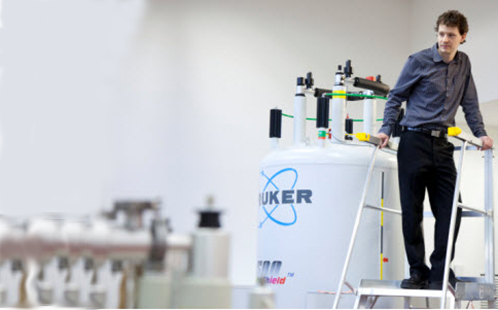 This year one of the world's most powerful MRI machines will be installed at the University of Western Sydney giving scientists the ability to produce previously inaccessible and detailed – down to less than one-hundredth of a millimetre - images of living tissue and other materials.

The ultra-high resolution magnetic resonance imaging (MRI) system will provide unprecedented information on chemical and biochemical processes – without damaging the samples being studied.
Higher performance batteries, more effective cancer treatments and advances in agriculture are expected to be just some of the benefits that the new equipment will help deliver.
Using a recently announced $1 million Australian Research Council grant, UWS will install the ultra-high resolution MRI with a total cost approaching $2 million at its Campbelltown campus in the internationally renowned Biomedical Magnetic Resonance Facility which is dedicated to developing the next generation of techniques and analysis protocols for magnetic resonance imaging.
Professor Bill Price from the UWS School of Science and Health and the School of Medicine says the grant will take UWS and Australia to the forefront of magnetic resonance imaging capability.
"The new MRI will join existing infrastructure in the UWS node of the National Imaging Facility and be the focal point for more than 100 researchers and students from UWS and its institutional partners on the grant," says Professor Price, Director of the UWS node and Head of the UWS Nanoscale Organisation and Dynamics research group.
The principles of the MRI machines in Professor Price's lab are the same as the ones used in hospitals but key differences lie in the resolution and the amount of information that the University's machines can produce. For example, we can obtain high resolution images of placentas in live mice – this level of resolution is simply not possible in a hospital MRI.
"Almost any object or substance can be studied in great detail in an MRI machine. The ultra-high resolution of our machines and our finely tuned techniques can reveal, in great detail, drugs binding to proteins, changes in living tissue composition and even water flowing through a plant."
"The information from high resolution MRI imaging helps scientists visualise and better understand processes, reactions and molecular activity which would otherwise be invisible or just equations on a whiteboard. It also allows us to investigate animal models of diseases such as preeclampsia."

Magnetic resonance imaging (MRI) machines use very powerful magnets, sophisticated electronics and software to build images of just about any substance including animals, plants, minerals, chemical compounds and even water flowing through tubes.

The nuclei of many atoms, including those in human cells, behave like small bar magnets. When a patient, animal, plant or sample is placed inside the intense magnetic field of an MRI machine, some of the nuclei resonate. This resonance can be detected and is used to build a picture of the sample.

The magnetic fields used in an MRI are very strong - more than 200,000 times stronger than the Earth's magnetic field – but are completely harmless and there are no health risks for the patient, animal or plant.