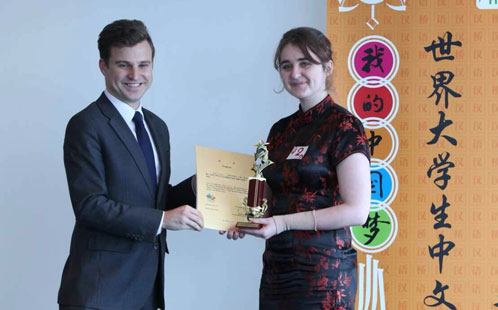 For the second year in a row a University of Western Sydney student has won the Australian leg of the most prestigious global language competition for non-native Chinese learners.

UWS Chinese language student Raen Turner impressed the judges with her mastery of Mandarin and was awarded First Prize at the 2014 NSW Chinese Bridge Competition.

The competition draws contestants from across Australia to deliver oral and cultural presentations in Chinese, with Raen's performance of traditional Chinese poetry striking a chord with the judges.

"Hearing my name announced as the winner was an incredible experience, and one that will live with me forever," she says.

"It's my dream to go to China and learn more about the culture, and fortunately enough I've been awarded the William Chui Scholarship and will be spending six months at the Beijing Foreign Studies University."

The Leader of the UWS School of Humanities and Communication Arts China Liaison Unit, Dr Ruying Qi, says Raen worked incredibly hard for the competition, and her win demonstrates the quality of teaching and students at the Chinese language program at the University of Western Sydney.

"Over the past six years a UWS student has either won or been in the top three finalists in the event, reflecting the consistent high performance of our teaching," says Dr Ruying Qi.

The Dean of School of Humanities and Communication Arts, Professor Peter Hutchings, has wished Raen all the best as she joins the ranks of UWS students to further their studies in China.

"On behalf of everyone at the School of Humanities and Communication Arts I want to congratulate Raen for her fantastic achievement," he says.