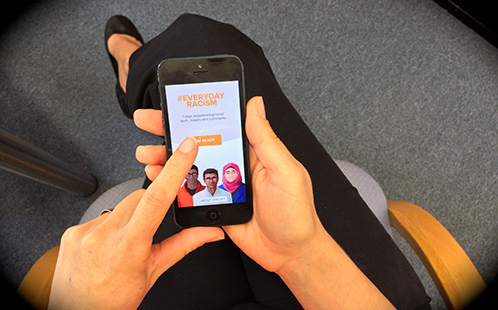 Could you walk in the shoes of someone who is subjected to racism on a daily basis? University of Western Sydney researchers are launching a world-first mobile phone app that challenges people's ideas about racism by actually experiencing it first hand.

Researchers from the UWS Challenging Racism project have teamed up with the charity, All Together Now, the University of Melbourne and Deakin University to create the 'Everyday Racism' app – a unique educational game that will challenge ideas about racism by having players live for a week as someone from a different culture or ethnic group.
Users of the app can choose to play one of four characters - an Aboriginal man, a Muslim woman, an Indian student, or they can be themselves.
Then, for the next seven days through their phone, they are confronted with various scenarios of everyday racism, received through text messages, tweets, images and videos. The everyday racism might take the form of being ignored while trying to order coffee, missing out on a promotion due to your cultural background, or being subjected to an off-hand comment.

When faced with a scenario, the users have options as to what to do next. Once they choose an option, they will see the consequences of that choice. 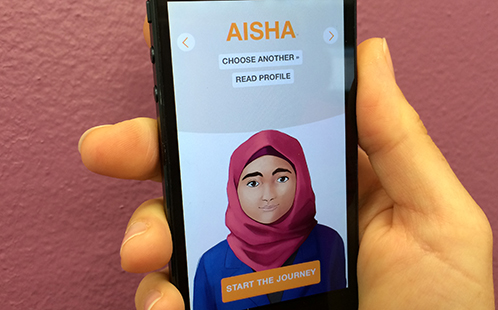 Lead researcher on the University of Western Sydney's Challenging Racism project, Professor Kevin Dunn, was part of the team that developed the app. His team has spent the last 15 years researching racism, which has included surveying more than 12,500 Australians to provide a national picture of racism and cultural diversity.
"Everyday racism is subtle and more insidious, and can often be expressed in ways that makes it harder for people to confront," says Professor Dunn.
"Our research shows that the strongest obstacles to bystander action are a lack of awareness of what can be done, fear of being targeted yourself and fear of damaging interpersonal relationships."
Professor Dunn  says, the app educates people about racism, showing them first-hand what it's like to experience it, and builds confidence in how to respond to racism, and in doing so assist targets of racism.
"People need to be more empowered to speak up when they find themselves in these situations."
All Together Now is challenging all Australians to take the seven-day Everyday Racism test to see how they react by downloading the free app from 22 January from www.everydayracism.org.au

It is available for both iOS and Android devices also from the Apple Store and Google Play.

About the UWS Challenging Racism project

Challenging Racism is an anti-racism research collective based at the University of Western Sydney.

Researchers from around Australia contribute to the project, which is led by Professor Kevin Dunn.

The initial interest of the project was the geography of racism in Australia, however over its 15-year history the project now encompasses a wide range of anti-racism research.

Core interests of researchers involved in the project include bystander anti-racism (what ordinary people who encounter racism can do to respond); the effectiveness of different types of anti-racism in varied contexts; and Australians attitudes to diversity and experiences of racism.