The University of Western Sydney pays tribute to Gough Whitlam 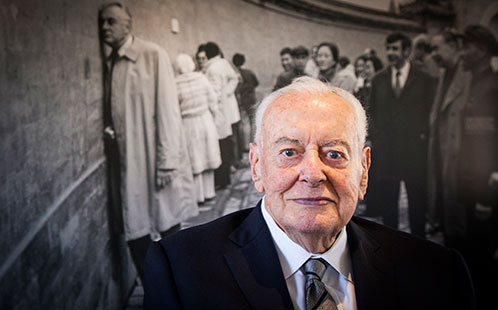 With the passing of former Prime Minister, The Honourable Gough Whitlam, AC QC, Australia has today lost a genuinely intellectual leader and one of our greatest social reformers.

It was with a sense of tremendous pride when this University was chosen by Mr Whitlam to be home to the Whitlam Institute and it is with a heightened sense of responsibility that we acknowledge on this day the trust he placed in us.

Gough Whitlam was a remarkable man and a true visionary.

Universities were central to Gough Whitlam's vision of a democratic Australia:

"Academic freedom is the first requirement, the essential property of a free society. More than trade, more than strategic interests, more even than common systems of law or social or political structures, free and flourishing universities provide the true foundation of our western kinship, and define the true commonality of the democratic order." ¹

Gough Whitlam campaigned actively to establish a university in western Sydney and remained a very close friend of UWS and continued his strong support for the University until his death. In 2002, he received an honorary doctorate from UWS.

He was also one of western Sydney's greatest champions and instrumental in securing much needed services to people in Sydney's west in areas not just in education but health, infrastructure and urban development.

"It is perhaps symbolic of the emergence of Australia as a nation that Gough Whitlam, the classically trained, Melbourne-born, Canberra-raised, Sydney-resident humanist lawyer son of a centralist bureaucrat, should become a champion, teacher and symbol for Sydney's marginal suburbs." ²

Mr Whitlam was a towering political figure whose role in shaping our great nation and in equipping it for the modern world should never be under-estimated nor forgotten. He dramatically rewrote the political landscape during a fascinating and tumultuous time in Australian politics.

In 2000, the University founded the Whitlam Institute (opens in a new window) to honour the work and life of Mr Whitlam.

The Whitlam Institute, as a dynamic public policy institute, pursues the causes he championed; through the Whitlam Prime Ministerial Library it is custodian of the Whitlam legacy; and it engages with the community through an extensive civics education and outreach program. It is a lasting legacy to Mr Whitlam's many contributions to Australian public life.

On behalf of the UWS community, I extend our sincerest condolences to the Whitlam family.

1. Speech "Universities and Governments" delivered to the Harvard Club of Australia on 1 June 1973
2. Dr Mark Richardson, Gough Whitlam and the 'Grounds' for a University of Western Sydney: 'A riveder le stelle', Whitlam Institute, October 2011