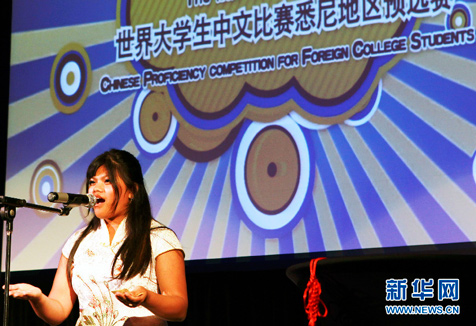 UWS student Mao Zaomoe will travel to China for the international finals of the Chinese Bridge competition after impressing the local judges with her mastery of the language and culture and being named the winner of the Australian heats.

The competition saw 14 contestants from across Australia deliver an oral presentation in Chinese followed by a cultural arts performance, with Ms Zaomoe's rendition of the songs My Chinese Dream and Mother is the Best in the World sealing her win.

Ms Zaomoe will now fly to China in July to compete against winners from around the world, a dream come true for the second year Bachelor of Arts student.

"I'm so excited to be travelling to China to represent the University of Western Sydney in this amazing competition, it's still sinking in," she says.

"I had prepared for this for two months, and hearing the announcement that I was the winner and would be travelling overseas made all my hard work worth it."

Born in Burma, Ms Zaomoe is fluent in Burmese and English, and on top of studying Mandarin at UWS she is also learning Japanese.

"I love learning languages and cultures- particularly Asian ones- and just adore their beautiful characters," she says.

"I am really looking forward to the opportunity to interact with non-native Mandarin speakers from across the world, and can't wait to discuss the language and culture with people who are as fascinated by China as I am."

The Leader of the UWS China Liason Unit, Dr Ruying Qi, has paid tribute to Ms Zaomoe and her teachers.

"The competition this year was very competitive, so to be announced as the winner is a tribute to Ms Zaomoe, and all her lecturers and tutors at the University of Western Sydney," she says.

"Over the past four years a UWS student has either won or been in the top three finalists in the event, reflecting the consistent high performance of the students and of the Chinese programme."

"On behalf of everyone at the School of Humanities and Communication Arts, I'd like to congratulate Ms Zaomoe and wish her all the best for the international competition."