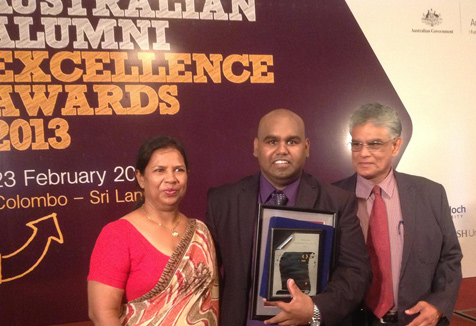 Each year the Australian Trade Commission invites Australian educational institutions to nominate Sri Lankan graduates who have excelled in their fields of work or study.
Damith Wijeratne has a long history with the University of Western Sydney. After arriving in Australia in 2003 as an international student, he enrolled in a Foundation Studies and then a Diploma program at Sydney West International College – which now operates as UWSCollege.
Damith won the College Medal in 2003 for completing the Foundation Studies program with a perfect GPA. After a successful transition into the University’s Bachelor of Mathematics and Information Technology degree, he was twice named in the Dean’s Merit List.
Following his graduation from UWS in 2006, Damith returned to UWSCollege to teach in the area of ICT and Mathematics.
The Austrade Australian Alumni Excellence Awards recognise and honour alumni who have attained exemplary achievements in their field of specialisation at a national, regional or international level, as well as those who have contributed significantly to the betterment of Australian education and their institution or alumni community.
Damith has been awarded the ‘Australian Alumni Award for Education,’ in recognition of his valuable contributions to education in Australia as a respected member of the Teaching Academe.
Dr Kerry Hudson, Dean and CEO of UWS College, says Damith is a highly regarded member of the UWSCollege team.
“Recently promoted to the role of Academic Administration Manager, Damith is also recognised by his colleagues at UWSCollege for his capability and commitment to students and the organisation,” says Dr Hudson.
UWSCollege provides a pathway for students who otherwise may not have an opportunity to access higher education.
As an international student himself, Damith understands the difficulties, needs and rewards of being a student in this position and works to ensure that UWSCollege students are supported in their transition to University.
Also heavily involved in amateur sporting pursuits, Damith plays for local Sydney teams in Rugby Union and Cricket. He has been instrumental in organising UWSCollege students to play cricket matches against other Colleges.
Damith is currently undertaking his Masters of Information and Communications Technology at UWS, maintaining a distinction average – a significant achievement as he balances his studies with full-time work.