Travelling through a rough neighbourhood just as scary for the planet 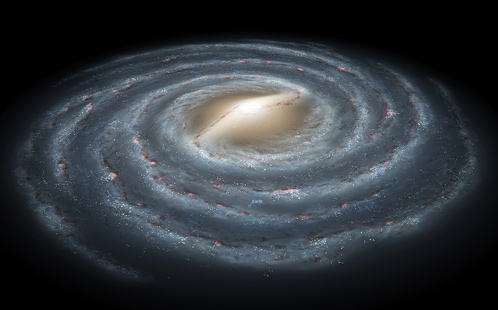 Strap yourself in for a bumpy ride – the solar system is about to enter into a rough neighbourhood of the Galaxy which, according to University of Western Sydney researchers, could have some crazy consequences.

A new model of the Milky Way and our own Solar system’s movement through its spiral arms, developed by Associate Professor Miroslav Filipovic, Associate Lecturer Evan Crawford and Dr Nick Tothill from the UWS School of Computing, Engineering and Mathematics, has revealed a correlation between the times at which our Sun crosses the spiral arms and the six mass extinction events here on Earth, including the disappearance of the dinosaurs some 62 million years ago.

This discovery was recently published in the paper ‘Mass Extinction and the Structure of the Milky Way’ in collaboration with Dr Jonti Horner, Post-Doctoral fellow at the University of New South Wales.

Associate Professor Filipovic and his colleagues used existing survey data to create a symmetrical model of the Milky Way, rather than the usual non-symmetrical model. This was then combined with a recently derived solution for the solar orbit to determine the timing of the Sun's historical passages through the Galaxy's spiral arms. Correlations between the two, indicate that the spiral arms have the potential to cause catastrophic events on Earth.

“Our Sun, with its planets, crosses into a spiral arm which is like a ‘rough neighbourhood’ where ‘crazy things’ can happen,” says Associate Professor Filipovic.

“By ‘crazy’ we mean various space junks such as comets, asteroids and even nearby star explosions that may provoke other catastrophic events on Earth such as increased volcanic activity.”

Professor Filipovic and his colleagues also found an additional five mass extinction events that have the potential to be explained by the Sun’s movement around the Galaxy.

“By drawing such correlations we are able to explore the potential of explaining mass extinction events, and possibly even predicting them into the future,” says Professor Filipovic.

“However, most significantly, it looks like our Galaxy may be a very symmetrical harbour of stars and gas, and where we actually spend at least half of the time in a rough neighbourhood, in fact we are just about to enter one.”