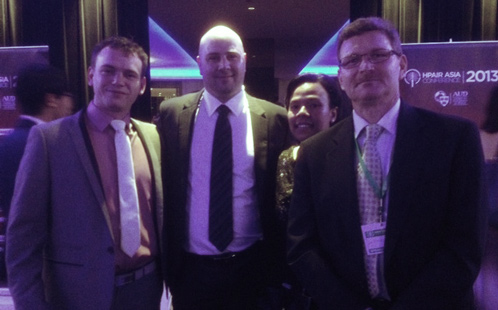 Three University of Western Sydney students recently represented the University on the world stage at the Harvard Project for Asian and International Relations 2013 Asia Conference in Dubai.

"This was an extraordinary opportunity for UWS students - they experienced international travel and exposure to differing cultural values and learning systems," says Dr David Walton, Senior Lecturer in Asian Studies and International Relations, UWS School of Humanities and Communications Arts.

"A major feature of the conference was meeting leading academics, government officials and high calibre students from across the Asia Pacific. The intellectual enrichment, confidence building and networking possibilities were truly fantastic."

As well as being academic supervisor to the students, Dr Walton also presented his invited paper 'Juggling an Extraordinary Triad:  China and Japan in Australian Foreign Policy' at the conference.

"Presenting at the conference was a fantastic experience because I was able to engage with a wide range of leading scholars in international security and foreign policy areas, and high achieving undergraduate students from around the world, many of whom will be future leaders."

The HPAIR 2013 Asia Conference carried the theme "Extending Horizons: Charting Asia's Flourishing Future" and sought to answer questions such as 'How should Asia respond to the threat of nuclear proliferation in North Korea and military instability in other parts of the world?' and 'How can Asian countries preserve their traditions while the pressures of globalization push them towards modernisation?'

The conference saw future and current leaders from around the world gather in Dubai for a five-day dialogue, addressing the events that have helped to shape the current status of Asia on the world stage.

The students were financially supported on their trip by the Office of the Pro Vice-Chancellor (Students and International).