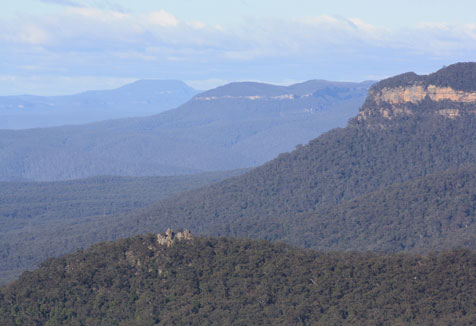 The first expedition across the Blue Mountains paved the way for the most important road in Australia’s history, heralding the beginning of the country’s pastoral age, according to a transport historian at the University of Western Sydney.

This weekend marks the bicentennial of the crossing of the Blue Mountains, and descendants of the original explorers are marking the event with a landmark expedition tracing the steps of their forefathers.

Professor Robert Lee, from the UWS School of Humanities and Communication Arts, says the journey of Blaxland, Lawson and Wentworth in 1813 across the previously uncharted terrain was a landmark event for the young colony.

“Just under a year after the explorers returned to Sydney a team of fifty convicts followed in their footsteps to build the single most significant piece of transportation infrastructure in Australia, a 160 kilometre road across the Blue Mountains,” Professor Lee says.

“Before this road New South Wales was a small colony clinging timorously to the sea, a depot for the reception of convicts with marginal security value.”

“But after the road was built it grew into a rich and prosperous country, a truly valuable acquisition for the British Empire.”

Professor Lee says the crossing of the Blue Mountains in 1813, followed by the building of Cox’s Road and the establishment of Australia’s first inland town at Bathurst, marked the beginning of the pastoral age in Australian history.

“The modern mix of agricultural and pastoral activity in the interior of Australia was dependent on these pioneering crossings of the imposing ranges separating the port of Sydney from the interior,” he says.

“The pastoral industry would dominate Australia’s exports until the 1960s, highlighting just how critical these early expeditions were for the economic development of the country.”

Some fifty years after the road was built, a railway line across the Blue Mountains was constructed parallel to the original expedition.

Professor Lee says due to costs the railway, built by Australia’s greatest nineteenth-century engineer, John Whitton, was forced to use zig-zigs as an innovative solution to the engineering challenge of taking a railway down a cliff.

“Whitton’s Great Zig Zag is widely recognised around the world as an innovative work of daring virtuosity and genius, and was subsequently much copied elsewhere,” he says.

“For the half-century of its regular use, its status was the same as that of the Sydney Harbour Bridge or the Opera House today - it was, in short, humanity’s greatest material achievement on the continent, a wonder of the modern world.”

“As we head into the third century since that first European expedition across the Blue Mountains, it’s worth pausing to also acknowledge the contributions of those that followed, quite literally, in their footsteps to forge the crucial connections to inland Australia.”