Women’s business makes a difference: Announcing the winners of the 2012 Women of the West Awards 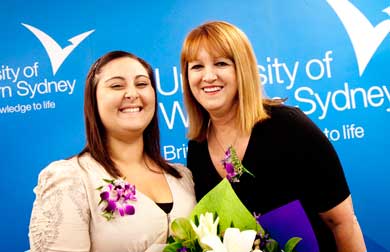 Two enterprising and inspirational western Sydney business women are this year's winners of the University of Western Sydney's Women of the West Awards.

Lea Hicks is the co-owner and General Manger of the Hix Group Pty Ltd, which was established more than 20 years ago as a small two person operation, and has since grown into a thriving enterprise that encompasses six business arms and employs more than 55 staff.

Lea was nominated for the Women of the West Award for her ongoing commitment to giving back to the local community, creating employment opportunities, and supporting local industry. She says she is passionate about economic development in Greater Western Sydney and providing valuable opportunities for young people in the region. 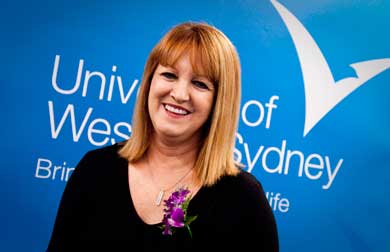 Christa Anthony is a full-time counsellor and case manager with the Penrith Women's Health Centre and founder of Studio Dance NSW – a performing arts school, established in Kings Park in 2009, that caters for more than 120 students.

Christa was nominated for the Young Women of the West Award for her dedication to making the benefits of dance and drama accessible to everyone. Her studio welcomes students of all ages, offers 'bonus' classes for free to help families, especially those from disadvantaged backgrounds, and encourages students with special needs by treating them the same as their classmates, irrespective of their skills and abilities.

UWS Vice-Chancellor, Professor Janice Reid, congratulates Lea and Christa on their awards, and says they are outstanding role models and examples of how an individual's drive and passion can directly benefit the wider community.

"The Women of the West Awards celebrate the achievements of our outstanding local women, who show leadership in their fields and contribute to improving the lives of people in Greater Western Sydney," says Professor Reid.

"Lea and Christa are two women who embody the spirit of the Awards – as the owners of local businesses in western Sydney they are making significant contributions to the development of the region, and are working tirelessly to ensure that the community that prospers." During the ceremony, 'Highly Commended' awards were also presented to Awhina Waapu of Airds, Samantha Ewart of Glenmore Park, and Amna Karra-Hassan of Granville.

'Commended' awards were presented to Dr Chandrika Subramaniyan of Girraween and Dr Cen Amores of Auburn.

"On behalf of UWS I congratulate our winners and all of the Women of the West nominees for 2012 - UWS is very proud to welcome you to our University community," says Professor Reid.

Note to Editors: High resolution photos of the event are available upon request.

More photos from the 2012 Women of the West Awards