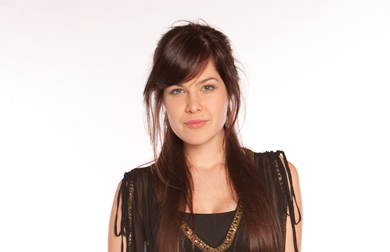 Viktoria Bolonina, a Bachelor of Music student at UWS and contestant on The Voice

Staff and students at the University of Western Sydney may have recognised a familiar face when Viktoria Bolonina walked onto the stage of Channel Nine's hit show, The Voice.

Viktoria, who was born in Russia and has lived in Australia since the age of ten, is now a 20-year-old Bachelor of Music student at the UWS Penrith campus. For the last two years, she has spent up to four days each week at university, absorbing knowledge, expanding her musical repertoire, and performing alongside her peers.

Over the last few weeks, however, Viktoria's musical talents have propelled her beyond the University's lecture theatres and onto a national stage. Since submitting a video audition online to The Voice, she has participated in a whirlwind of auditions, mentoring sessions and performances, and her musical talent has been exposed to an audience of millions. "It has been such an amazing experience," says Viktoria. "I am living the biggest dream for any performer, and everyone back at UWS has been so supportive. All of my friends, the lecturers, and even the canteen staff have all been congratulating me every step of the way."

These steps have so far included the 'Blind Audition' round, in which Viktoria's performance of the Kate Bush song Babooshka induced her idol Delta Goodrem to turn her chair and become her coach.

The stakes were higher in the next round, which saw Viktoria competing against classically-trained singer Peta Jeffress; however the student's interpretation of Prince's Purple Rain propelled her to the next stage, the 'Live Rounds'. 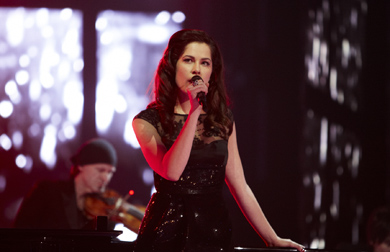 Performing in the 'Live Rounds' of The Voice

Having now performed Bang Bang (My Baby Shot Me Down) on Monday May 14 – the program drawing over 2 million viewers – Viktoria must wait for the results of the all-important viewer vote, to see if she stays in the competition.

"This last week has been really stressful, waiting for those votes to come in. But while I wait, I've had the chance to catch up on some sleep, and to get back to uni," she says.

Viktoria says she owes a lot to her studies and the opportunities that a university education provides.

"I'm 20 years old and I have spent the peak years of when I am being shaped, both as a person and as an artist, at UWS," says Viktoria.

"I really believe that, as a musician, knowledge is something that can really enhance your practice. These past two years have given me so much experience, and exposure to such a wide range of musical styles – it has enabled me to connect with my songs on such a deeper level." 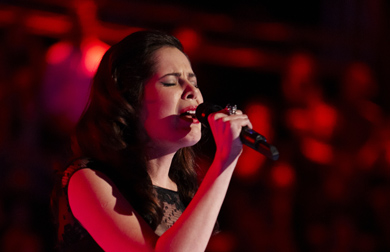 Performing Bang Bang (My Baby Shot Me Down)

It is anyone's guess where The Voice will take Viktoria Bolonina, and how the hit show will impact on her music career and her future. But whatever happens, Viktoria says her studies will continue to be a priority.

"My number one love is performance – I could do that for the rest of my life. But my plan has always been to continue my studies; to finish my Bachelor of Music and then do a Master of Teaching," says Viktoria.

"I just love kids. I love things that I can give part of myself to – music allows me to do that, of course, but I have so much more to give. I would love to become a music teacher, and to be part of the process that helps them grow."

The University of Western Sydney congratulates Viktoria on her music success, and wishes her all the best for the remainder of the competition.