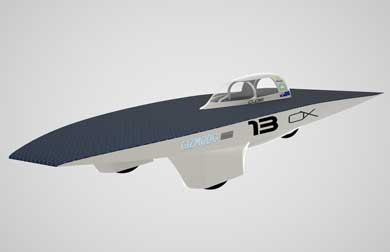 The University of Western Sydney Solar Car Team has their sights set on international acclaim as they power towards the 2013 World Solar Challenge.

The Solar Car Team, established in 2011, consists of a group of 35 students, volunteers and alumni from the disciplines of mechatronics, electrical, computer, business, accounting, health sciences, science, media and industrial design at UWS.

This skilled group has been working together to design and construct a vehicle powered entirely by solar energy that is eligible to compete in the 2013 race from Darwin to Adelaide.

Dr Ali Hellany, senior lecturer at the School of Computing, Engineering and Mathematics and academic supervisor for the Solar Car project believes UWS has the potential to succeed in the 2013 World Solar Challenge.

"At UWS, we are fortunate to be working with a highly talented and enthusiastic, multidisciplinary team," says Dr Hellany.

"Even at this early stage we can see the potential for the team to not only complete the race but also do quite well in it." 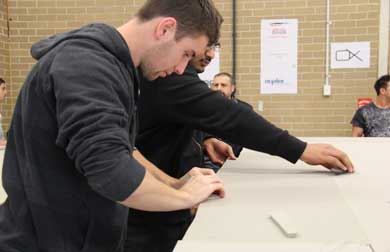 The team hard at work laying foam over the car's shell.

The bi-annual 3000 kilometre race will run from 6th October 2013 at which time teams will depart Darwin and travel south along the Stuart Highway.

Even the harsh central-Australian environment and tough competition – which includes Japan's Tokai University and America's University of Michigan – has not fazed the UWS Team.

"The race is all about energy management and efficiency," says UWS engineering alumni and team leader Jay Manley.

"We're aiming for an average speed of 100 kilometres per hour for the 3000 kilometre distance all on the power of a conventional toaster. One of the main missions of the team is not only to encourage collaboration within the university but to also encourage thinking and research on sustainable transport at UWS."

The vehicle, constructed out of light-weight carbon fibre, will be of 4.5 metres in length and 1.6 metres in width. The design features a CSIRO in-wheel motor that will take full advantage of the solar energy produced and give the vehicle a theoretical top speed of 150 kilometres per hour.

The team has already started construction of the vehicle's body and chassis and plan to have a display at the University of Western Sydney Open Day on 26th August.

Read the story on Gizmodo Australia