Simon Koch, a Year 10 student from Colo High School, won $300 for his project 'Salinity in a Kelvin Water Dropper'.

The University of Western Sydney extends its congratulations to the science-savvy school students whose outstanding talents were recently recognised at a prestigious awards ceremony on the UWS Bankstown campus.

The Young Scientist Awards - a major project of the Science Teachers' Association of New South Wales (STANSW) - are held annually with the aim of giving students from Kindergarten to Year 12 worthwhile incentives to carry out scientific investigations.

This year, thousands of students entered the competition and from those, 723 entries from 880 students overall made it to the state judging level, which has been a significant increase on last year.

UWS has been a sponsor of the initiative since 2008. The 2012 awards ceremony was attended by primary and high schools students from all over NSW, as well as their teachers and parents.

Ms Anne McLean, Manager of Schools Engagement at UWS, says the University's sponsorship of the awards demonstrates its commitment to helping young people achieve their educational, career and life goals.

"The University is proud to support an event which each year boosts the confidence of so many students, and encourages them to be creative in the pursuit of knowledge," says Ms McLean.

"The initiative encourages and rewards the pursuit of scientific excellence. Australia needs more scientists and these bright and motivated students represent the next generation of brilliance." 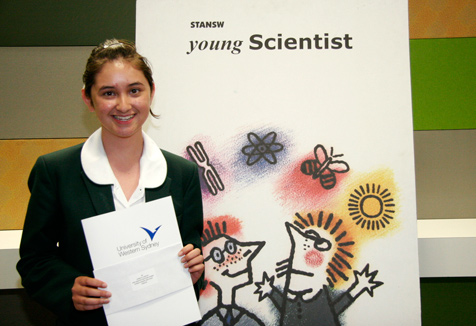 Danielle Santos, a Year 9 student from Macarthur Anglican School at Cobbitty, took second place and was awarded $200 for 'Exploring the Workings of Modern DC Electric Motors'.

At the special awards event, Professor Gregory Kolt, Dean of the School of Science and Health, congratulated the students and spoke to them about the importance of scientific endeavour.

A keynote address was delivered by Dr Anne Musser, a palaeontologist from the Australian Museum, who shared her experiences of working in the Jenolan Caves and other fossil-rich sites around the world.

Awards were presented to 61 primary and high school students who were finalists in their age groups and categories.

The UWS award for the best entry from Greater Western Sydney was shared between two students.  First place of $300 went to Simon Koch, a year 10 student at Colo High School, for 'Salinity in a Kelvin Water Dropper'. In second place, with a prize of $200, was year 9 student Danielle Santos from Macarthur Anglican School at Cobbitty for 'Exploring the Workings of Modern DC Electric Motors'.