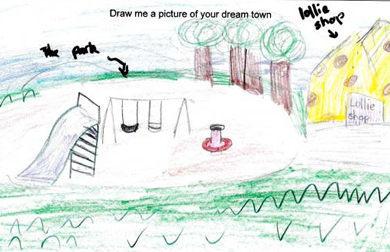 Buy young children the latest toy and they may be more interested in playing with the cardboard box; take them to the local park, and they may wander away from the playground to climb in the surrounding trees or to search for wildlife.

Professor Karen Malone, an expert in children's independent mobility from the University of Western Sydney, says adults and children often have very different ideas about what constitutes a fun environment.

"Many parents envisage the indoor kit-style play equipment that is found in fast-food restaurants – with their colourful plastic structures, fences and carpeted areas – as the best place for kids to play," says Professor Malone, from the UWS School of Education.

"However, when given the chance, most children prefer to play in wide open spaces within their natural environments, where they can have more freedom to explore, and make up games using their own imaginations." Professor Malone was commissioned by Stockland to conduct an independent research project that worked with children to design a truly child-friendly park for the Brooks Reach housing development in Dapto.

The Dapto Dreaming Project involved 150 children aged 5-10 from West Dapto Public School in a series of workshops and activities from April to July 2011.

Through drawings, photographs, surveys and conversations with the research team, the children shared with the developers their feelings about their local communities, as well as their hopes and dreams for its future.

From these indicators, Professor Malone says it is clear that the children of Dapto cared about their neighbourhood and valued the spaces that enabled them to learn, play and be active with friends. 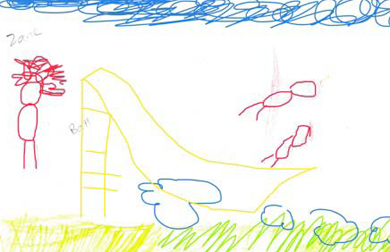 Following this consultation with the children from West Dapto Public School, a group of 12 Year 5 students were selected to analyse the findings and to develop recommendations for the design of a unique, child-friendly play space and pathway within Brooks Reach.

"The group recommended that a park be constructed within Brooks Reach that would provide a space for children to have adventures, dream, imagine, and create their own play opportunities," says Professor Malone.

"Sustainability was also an innate focus of the group. The children placed high value on having native plants and attracting wildlife into the play space, as well as commemorating the area's indigenous heritage."

Stockland have since taken these recommendations on board, and Wollongong Council has recently granted DA approval to build a 6,800 square metre park in Brooks Reach.

When the plans for the park were presented at a West Dapto school assembly, Professor Malone says the students responded with thunderous applause and chattering excitement. Michael Braithwaite, Senior Development Manager at Stockland, says the consultation with the children has been an exciting, eye-opening experience.

"This is believed to be the first time an urban developer has directly involved children in the design process for a new residential development," says Mr Braithwaite.

"Encouraging a healthy and active life is something Stockland is really passionate about, so we wanted to come up with something that the kids and their families would enjoy and use regularly."

Professor Malone says it has been an innovative step on behalf of Stockland to value children's insights and to allow them genuine input into the design of their neighbourhoods.

"A truly child friendly city is a place where children's rights and needs are at the centre of good community planning and design. It is a place where adults listen to young people and take what they say seriously," says Professor Malone.

"Another key characteristic of a child-friendly city is its capacity to allow children the freedom to play independently in their neighbourhoods and to safely explore their natural environments.

"On the basis of these criteria, very few Australian cities have been able to maintain the child-friendly status that they may have enjoyed twenty years ago. But by making this positive step, of engaging with children and making the commitment to building safe and accessible urban spaces for children, Stocklands is moving in the right direction."

The proposed playground, which is scheduled for completion in October 2012, will include secret and shady places for cubby building, and rotating, spinning and turning equipment for thrill seeking. An adventure pathway will also be constructed to connect the old and new neighbourhoods with the school and the playground, and to give children more opportunities to explore, interact and engage with one another.