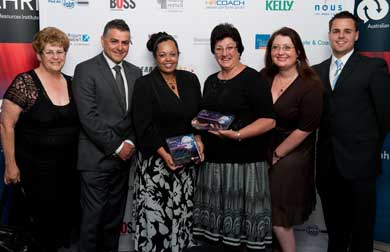 UWS has been short-listed as a finalist in the 2012 Australian Human Resources Institute (AHRI) National Diversity Awards.

UWS has been nominated for the ‘Cross Cultural Management Award’ sponsored by AMES, the largest provider of English language and settlement services in Victoria.

The award recognises organisations with outstanding management initiatives and strategies in a diverse or multicultural workplace – including the management of employees across borders.

Ann Tout, Executive Director, Office of People and Culture, says UWS is being recognised for its Aboriginal and Torres Strait Islander Employment and Engagement program.

“One of the University’s goals is to become an employer of choice across cultures, and to be an organisation that Aboriginal and Torres Strait Islander people choose as their place of work," says Ms Tout.

Melissa Williams, Director of the Office of Aboriginal and Torres Strait Islander Employment and Engagement, says her team is focused on creating and fostering a workplace environment that recognises and celebrates the diversity of cultures.

"Our team is focused on excellence, mutual engagement and making a sustainable difference," says Ms Williams.

"To be recognised for our strategies and outcomes in diversity and cross cultural management is a great achievement for the team, and provides the foundations for us to build a brighter future for all Australians.”

AHRI is Australia's premier human resources and people management organisation. Its national awards recognise outstanding individuals and organisations that demonstrate excellence in the contribution they make to their own business and to the profession.

As a finalist in this year’s AHRI Awards, UWS is keeping good company – other finalists in the ‘Cross Cultural Management Award’ include the National Australia Bank and the Royal Flying Doctor’s Service.

The winners of the AHRI National Diversity Awards will be announced at a gala luncheon in Melbourne on 17 May 2012.