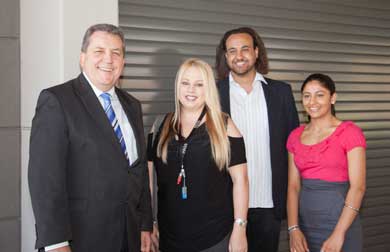 The University of Western Sydney has already exceeded the Gillard Government’s target of lifting the participation rate of students from low socio-economic backgrounds at Australian universities to 20 per cent by 2020.

Minister for Tertiary Education, Senator Chris Evans, who recently visited parents and students at the University’s Parramatta campus, said more than 50 per cent of commencing students are the first in their families to have the opportunity to attend university and nearly 8000 students across the UWS campuses - a record 23 per cent of total enrolments - are from low SES backgrounds.

"The Gillard Government is opening up the doors of our universities to more students than ever before," Senator Evans said.

"We believe in giving all eligible Australians, no matter what their background or where they are from, the opportunity to attend university.

"This is why we have moved to a demand driven system and lifted the cap on university places to make a university education attainable for a record number of Australians.

"More than half of the students commencing at UWS have been given an opportunity their parents never dreamt of – the chance to attend university and get the qualifications they need to access high skilled, high paid jobs.

"We have transformed the higher education system and the lives of many Australians along with it."

Vice-Chancellor Professor Janice Reid says the University was delighted to welcome Minister Evans, and to introduce him to UWS students, many of whom are the first in their families to attend university.

“For over 20 years, the University of Western Sydney has been opening up higher education opportunities for people from diverse backgrounds. UWS believes strongly that everyone with the passion and drive to succeed should have the chance to go to university,” says Professor Reid.

“Our students come from all walks of life - their personal journeys and inspiring stories very much reflect the UWS vision to be a university of both excellence and opportunity.

“UWS is proud to leading the way when it comes to widening higher education participation – providing opportunities and raising educational aspirations not only for the people of Greater Western Sydney, but playing our part in the national higher education agenda and to be, as we often say, a ‘University without walls’.”

Senator Evans said UWS students were benefitting from the Gillard Government’s policies as well as university strategies and programs to support students of all backgrounds through their study.

"UWS, in partnership with a number of NSW universities, received more than $21 million from the Gillard Government’s $177.6 million Higher Education Participation and Partnerships Program to increase the number of students from low SES backgrounds involved in higher education," Senator Evans said.

"UWS has a range of interlinked programs to achieve this from schools and community engagement, Indigenous school student mentoring programs, academic support and peer mentoring programs to help first-year students transition to university, and providing pathways through the VET system and its own UWS College.

"The Gillard Government will continue to support universities to give Australians from all corners of the country the opportunity to access a university education and get the skills they need to get a job, not only for their own benefit, but also for the benefit of the broader economy."