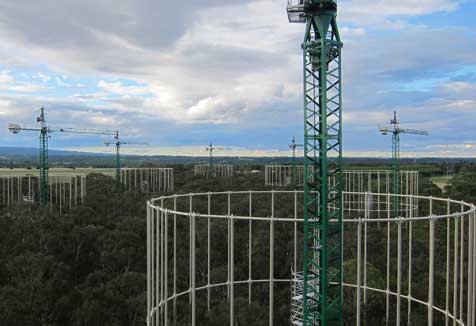 From above it could be six Stonehenge circles each 25 metres across. From the ground the view is reminiscent of unfinished high rise buildings – nine stories tall - complete with half a dozen 43 metre cranes. Neither past nor present, these strange monolithic rings in a bush woodland near the University of Western Sydney are in fact atmospheric time machines.

Using the EucFACE facility teams of scientists and engineers will expose tracts of bush to elevated concentrations of atmospheric carbon dioxide – similar to those predicted in the next 35 years.

The impact of the higher CO2 levels on everything within the rings from the genes in plants, insects and microorganisms to growth rates of trees to the function of the entire ecosystem will be studied. It's a massive undertaking and it's unique in the world.

"This is the first time a mature forest ecosystem will be exposed to higher CO2 concentrations," says principal investigator on the EucFACE, Professor David Ellsworth from the UWS Hawkesbury Institute for the Environment. "This experiment will reveal how our Australian bush will react to the inevitable increases in atmospheric concentrations of carbon dioxide. It's important because we need to know how the changes in the atmosphere could affect the pattern of water used by millions of hectares of bush, how much carbon the bush can lock away and how the ecosystem will adapt to the new conditions."

The EucFACE is on a patch of Cumberland woodland scrub on the UWS Hawkesbury campus near Richmond NSW, 60 kilometres from Australia's largest city, Sydney.

It's typical of the bush which once was common, now rare, across the Sydney basin.  But it wasn't selected for its uniqueness. The 5 hectare site serves as a model for most bush ecosystems in Australia. It's the canary in the coal mine. The CO2 released into the test area will trigger responses from this ecosystem which the rest of the continent won't experience for decades. 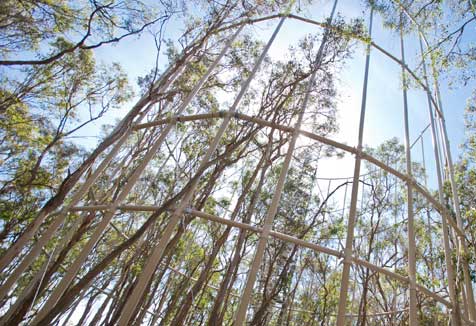 At the heart of the experiment is a collection of vertical vent pipes each 28 metres tall and peppered with holes delivering an extra dose of carbon dioxide. The pipes are arranged in clusters of 32 to form six circles each 25 metres across.

The rings are completely open to the air. There is no giant plastic bubble. The test site will experience the same temperatures, rainfall and other weather conditions as the surrounding bush. It's also open to animal and insect migration, creating a future atmosphere with ecological interactions.

"We're not creating another biosphere," says Professor Ellsworth. "This experiment is focused on the impact of higher levels of atmospheric carbon dioxide on the ecosystem. We have other experiments underway at the University of Western Sydney which look at different aspects of climate change including changing rainfall patterns and higher temperatures."

To the casual observer, the science of the EucFACE seems impossible. The air inside 500 square metres ring of bush will be different to the air around it without walls, a roof or air lock doors to seal it off from the outside world.

It is clever science and engineering that makes the impossible possible.

Local weather conditions are constantly monitored by scores of sensors in, around and on the rings. The data is used by computers to precisely control the flow of gas into the test rings.

Thousands of holes in the vertical vent pipes deliver a precise mix of carbon dioxide gas and ambient air. The flow is controlled by pneumatic actuators which independently close and open depending on the weather conditions at the time. For example more gas will be flowing from the vents that are up wind from the ring than those down wind. Looking down into one of the EucFACE rings

From sun up to sundown adjustments are constantly made to ensure the concentrations of CO2 within the ring stay within the experiment's parameters.

Professor Ellsworth says there's no need for the carbon dioxide to flow 24 hours a day as plants absorb CO2 only during photosynthesis which is driven by sunlight.

Within the test rings the ambient levels of carbon dioxide will be gradually increased to be 150 parts per million over the current average atmospheric concentration of 380 ppm.

"We don't want to shock the ecosystem with a sudden increase," says Professor Ellsworth. "We need to increase the levels faster than is happening in the real world but not so fast as to change the ecosystem overnight."

The levels of carbon dioxide in the test rings are not dangerous to humans.

"We'll all be breathing in this environment everyday in 50 years or so. The extra CO2 in the air won't harm us humans. The big question is how our environment will change."

Professor Ellsworth and a team of Australian and international scientists will monitor every aspect of the EucFACE site for at least the next five years.

"This is going to be the most watched patch of bush in Australia," says Professor Ellsworth.

Water use, carbon storage and changes to biodiversity are the top line items in the ecosystem budget which scientists will be most focused on. But it's also the sheer scale and depth of analysis underway at the EucFACE which makes this a once in a lifetime science experiment. 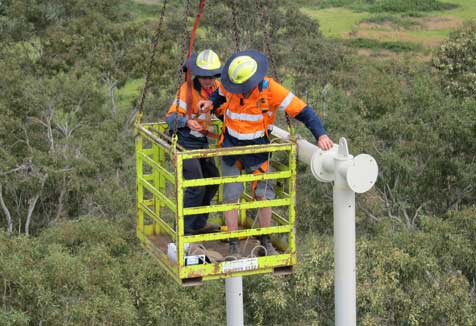 The six 43 metre high cranes used to help construct the rings will be redeployed as instruments of science – delivering unprecedented access to all levels of the ecosystem from ground level to above the tree canopy.

Below ground, fungi and microorganism communities – essential for plant health - and soil chemistry will be comprehensively studied in the field and in the nearby state of the art laboratories of the UWS Hawkesbury Institute of the Environment.

Sophisticated gene sequencing equipment will track the changes in microbial diversity and help detect genetic adaptation to the change in carbon dioxide levels.

"The research results generated by the EucFACE experiment will provide answers to questions about our future in a climate changed world," says Professor Ellsworth.

"Without this data we would be going into the next few decades blind.  Now we have the opportunity to provide policymakers with the information they need to see the road ahead...to respond to climate change."

The EucFACE and the UWS Hawkesbury Institute for the Environment research facilities were developed as a result of a $40 million grant from the Australian Government as part of its Education Investment Fund, together with funding from the University of Western Sydney.

Fast Facts about the EucFACE experiment