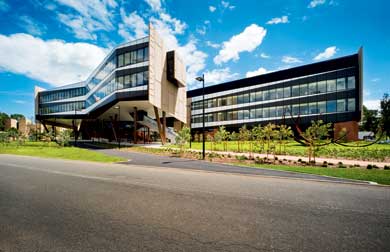 UWS School of Medicine building on the Campbelltown campus.

The findings indicate a need for alcohol interventions in such a setting.

Lead researcher Dr Alys Havard, from the University of Western Sydney School of Medicine, says the study provides evidence that risky drinking among patients of rural Australian EDs is prevalent and is over-represented relative to the general community.

With colleagues from the National Drug and Alcohol Research Centre at the University of New South Wales, and the Drug Health Service at Royal Prince Alfred Hospital she examined information from 1,056 patients presenting to five EDs in rural areas of New South Wales and an additional 756 residents of the same five communities.

They found that ED patients were more likely to engage in risky alcohol consumption than were people in the general community.

They also found that alcohol consumption posed a high risk of both short-term harm and long-term harm, more so than in the general community.

"That 46 percent of patients had experienced at least one negative consequence from their drinking in the last year is of particular concern, especially as this is almost double the rate experienced by the general community (25 percent)," says Dr Havard, who is a research fellow in the UWS School of Medicine.

"Being aged under 40, being single, not completing school and being a less urgent case were all linked with risky alcohol use.

"But risky drinking was far too common across all patient subgroups. This is why we recommend that all emergency patients are offered screening for alcohol problems. Then brief advice about their drinking can be offered to those that need it.

"In an earlier study, we found that this advice can be sent to patients in the mail, at a cost of less than $6 per patient. Patients who attended the emergency department for an alcohol-related reason reduced their drinking by 12 drinks per week after receiving this letter."

"Intervention programs need to be offered to patiensts who have single-occasions of heavy drinking, which present a risk of injury and other problems. They also need to be for those who drink more than is good for them of a regular basis," Dr Havard says.