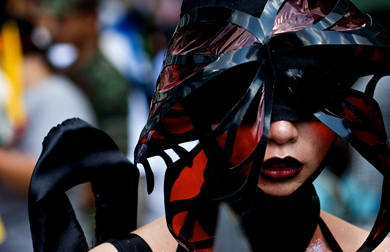 An international conference hosted by the University of Western Sydney will see experts from Australia and abroad outline new ways to better understand Asia in the Asian Century.

The Knowing Asia: Asian Studies in an Asian Century conference will be held at the UWS Parramatta campus from July 11 – 13, 2012.

More than 400 speakers, including some of Asia's most distinguished thinkers, will address the critical issues now facing one of the fastest changing regions in the world today, and reflect upon the challenges and opportunities Asia poses to Australia.

The Director of the UWS Institute for Culture and Society, Distinguished Professor Ien Ang, says Asia’s rising economic influence has transformed the way the region is understood.

“The vibrant new societies in Asia can no longer be understood using Western modernity as a benchmark, as they are becoming modern in their own ways and require new methods of analysis,” says Professor Ang.

“In short, as Asia becomes increasingly prominent, complex and self-confident, we need to rethink the way we try to understand the region.”

Former Secretary of the Department of Treasury and current Special Advisor to the Prime Minister, Dr Ken Henry AC, will lead a panel discussing the federal government’s White Paper on "Australia in the Asian Century". A series of three panels including UWS Professor Brett Neilson will explore the special economic zones that have been crucial to the emergence of post colonial Asia as an economic power.

In this paper, Professor Kong examines the changing higher education landscape in Asia, from the increased government and private investments in universities in many parts of Asia, to rethinking the balance of specialization vis-à-vis broad-based learning, to the rising interest among western universities in setting up campuses in Asia.

Modern universalisms developed from Kant to Marx are apparently in retreat, yielding to nationalism and consumerism, yet the physical salvation of the planet is of greatest urgency, and is becoming in some quarters the transcendent goal of our times. The non-Abrahamic forms of transcendence or what Weber called the “intellectual religions of the East” may furnish us with useful methodologies of linking the personal, the ecological and the universal.

The rise of a more assertive, nationalistic Indian media has become a live issue in New Delhi's relations with the nations of its region and beyond, and is testing New Delhi's capacity to forge stronger relations with key regional neighbours. At the same time, the decline of Indian studies and massive under-reporting by news media of the Indian story in Australia now pose obstacles to achieving the government's stated aim of developing a strategic partnership with India.

In recent decades there has been a growing unease in Asia about the applicability of philosophies and practices of cultural conservation imported from the West. A discourse of difference has emerged, where Asia is claimed to be materially, culturally and historically different to the West; most pointedly Europe, the global birthplace of the modern conservation movement. This paper argues that declarations about Asia’s culture, its landscapes, and its inherited pasts are the combined manifestations of post-colonial subjectivities and a desire for prestige on the global stage of cultural heritage governance.

The question of resilience is increasingly important in our contemporary world as climate change, rural and urban migration patterns, competing demands for land and water and globalisation create a number of complex challenges for communities. Moving beyond engineering and policy frameworks, the focus here is on ‘cultures of resilience’, such as the rice farmers who reinstated ceremonies to celebrate successful harvests, share indigenous rice species and promote a sense of shared community.