IT student recognised for innovative health and wellbeing smartphone app 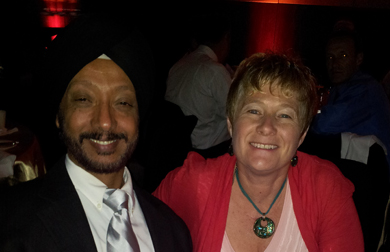 University of Western Sydney student Avtar Gill has been awarded the inaugural NASSCOM Innovation Student Award for his sophisticated smart-phone application 'Step on it Program' at the CeBIT conference held recently.

Avtar, a student with the School of Computing, Engineering and Mathematics, designed his app as a project with his company 'Health Pointe' and with help from his university staff. He believes it is innovative and user-friendly.

"The app is designed to help monitor the smartphone user's body data, for example height, weight and age," says Avtar, who is studying the Bachelor of Information and Communications Technology.

"50 per cent of the population is overweight or obese and the app can help them analyse their health by providing rapid feedback, recommending exercise or dietary programs and charting their progress as they undertake the recommended program."

Information technology is not Avtar's only area of expertise. Prior to commencing his Bachelor of ICT, Avtar completed a Bachelor of Medicine/Bachelor of Surgery in the United Kingdom, Family Physician Training in Victoria and a Fellowship of the Australian College of Psychology.

Avtar had been a practising doctor for more than 20 years before he moved into IT and believes this has given him a better understanding of the app's users.

"I changed career paths because I felt ICT would allow me to help working Australians improve their health," says Avtar.

"My work in medicine has given me an understanding of the health needs of Australian society, especially 'time poor' mum and dads who don't have the time to assess and improve their health."

With health informatics and technology becoming increasingly important in the medical field, Avtar feels smartphone technology is a path to a healthier population."Health and well being is important and to combat problems with smarter technology is the way to go," says Avtar.

"Doctors can use new technologies to be more efficient and give value to time with their patients by utilising data automation tasks, amongst other things."

Dr Joanne Curry, Director of Academic Program of the Bachelor of Information and Communication Technology, can also see the potential of the 'Step on it Program' app.

"The NASSCOM Innovation Student Award recognises Avtar's hard work and belief in improving the health and wellbeing of Australian society as a whole," says Dr Curry.

"The app has the potential to make a real difference in the lives of working Australians and I congratulate Avtar on his innovation and achievement."

Avtar was presented his award by the Hon. Sachin Pilot, Minister of State in the Ministry of Communications and Information Technology, Government of India, The Hon Greg Pearce, Minister of Finance, NSW and Mr Paul Toole, MP and Parliamentary Secretary to the Deputy Premier and for Asia-Pacific Trade.

Avtar will continue to develop and improve his app with 'Health Pointe'.